The competition in processors between Intel and Advanced Micro Devices heats up today as Intel launches its S-Series family of microprocessors targeted at gaming machines.

AMD has Intel beat on core counts with 16 cores and 32 threads, while Intel’s latest processors have 10 cores and 20 threads. But Intel’s processors are clocked higher at up to 5.3GHz, compared with AMD’s at 4.7GHz.

That’s a close competition and much closer than AMD has ever been before. But Santa Clara, California-based Intel claims it now has the edge over AMD with its turbo boost frequency that reaches up to 5.3 GHz. Of course, this means that in some cases with multithreaded games, AMD will do better, and Intel could do better with single-threaded games. Intel claims that most games and applications still depend on high-frequency cores, and so faster clock speeds will lead to better framerates. 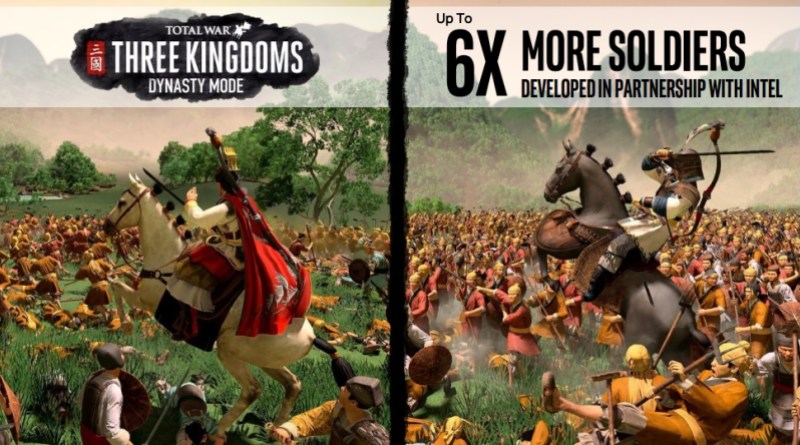 Above: Intel says its latest processor is good for games like Total War: Three Kingdoms.

Intel said that Sega’s Total War: Three Kingdoms dynasty mode has been optimized for the new Intel processor. As a result, players will see as many as six times more soldiers on a screen at a time. That’s should make the graphics a lot prettier. Sega’s Creative Assembly developed the dynasty mode in partnership with Intel so players can fight off waves of attackers.

Intel has added some new overclocking features as well. Intel said that its processor can run PlayerUnknown’s Battlegrounds 10% faster in frames per second compared to its previous generation of chips, and 63% faster than a three-year-old PC.