Also this week: An NLP researcher announced plans to host the first-ever AI workshop inside Nintendo’s Animal Crossing: New Horizons this July. Artie lead scientist Josh Eisenberg told VentureBeat that more than 200 people have already signed up to watch the day-long event. Animal Crossing: New Horizons launched March 20 and is now the best-selling game in the U.S. and third-best launch of any game in Nintendo history.

One major area of focus for each event is figuring out how to create social connections. That’s part of what motivated an Animal Crossing AI workshop.

By contrast, the International Conference on Learning Representations (ICLR) may be the largest AI conference to take place entirely online. Each of the 680 papers was presented by authors via a prerecorded 5- or 15-minute talk. Every video was accompanied by recommendations for similar papers, something one attendee suggested should become the standard for all machine learning research conferences. There was also a paper search bar and visualization showing how each paper relates to each other to group similar works and make it easier to spot major areas of interest. 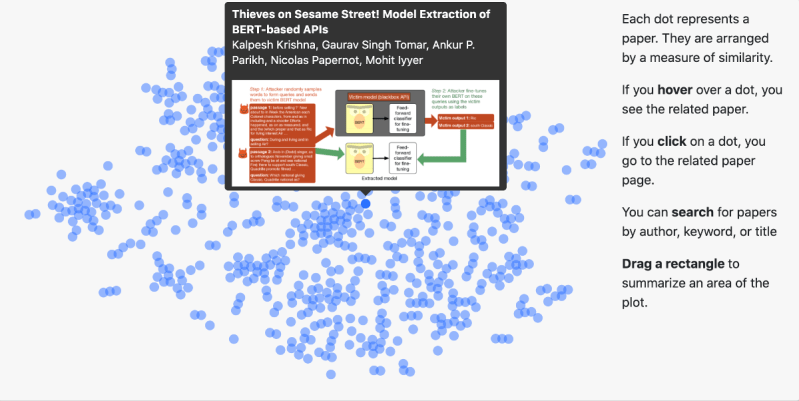 Many people are pondering the best ways to host digital events. It’s something VentureBeat and other media brands are thinking about a lot internally as well. This week, VB ran its annual GamesBeat Summit event entirely online, and Transform, VB’s annual AI conference, will take place online in July.

Three members of the VentureBeat AI team “attended” ICLR to check out innovative research in GANs like U-GAT-IT, NLP like Reformer, and neurosymbolic AI Iike Clevrer, as well as workshops on topics like climate change, affordable health care, and machine translation for African languages.

The entire week’s worth of ICLR keynote addresses and workshops were pre-recorded and available on the first day of the conference, so attendees could binge watch them or peruse them throughout the week. The advantage of tuning in to a given talk or workshop at its appointed time on the schedule was to get access to live Q&A with speakers and participate in the live chats that accompanied each session.

It appears there’s no simple way to recreate the busy floor of a conference poster session today. Instead, each author attended live Q&A sessions with colleagues. A remarkable amount of online feedback was positive, but one ICLR attendee told VentureBeat they found some lack of participation in poster sessions. Since ICLR organizers only chose to convert to an all-digital conference last month, maybe posters sessions attendance improves when attendees know they can schedule time to talk about novel work or meet a favorite research author.

By going entirely digital, ICLR more than doubled participation from 2,700 in 2019 to 5,600 people from nearly 90 countries. There were more than 1,400 speakers and one million page views, and videos were watched more than 100,000 times, organizing committee general chair Sasha Rush wrote in a tweet.

Cutting the expense is another major plus. The Animal Crossing conference will run you the cost of Animal Crossing: New Horizons ($60) and a Nintendo Switch ($299). ICLR was $100 down from the $500 of an in-person ticket cost. Add in the cost of a plane ticket to Ethiopia, lodging, and meals, and the physical conference could have cost upwards of $2,000.

But a challenge for digital events going forward, it seems, is finding ways to connect people.

A Medium post by a researcher who described social challenges includes comments from Rush, who said creating a flow at the conference akin to the in-person feel of flowing between posters and hallway chats was a challenge. “I don’t think we have totally figured that out yet, but it was fun trying to recreate virtual versions of these interactions,” he said.

In a blog post in February, ICLR organizer Yoshua Bengio — one of the most cited researchers in the world — urged the machine learning community to begin thinking about and experimenting with how to make digital conferences work in digital environments. Bengio, who gave a keynote address at ICLR this week and did live Q&A with Turing Award winner Yann LeCun, first insisted on more digital offerings as a way to cut down on the machine learning community’s carbon footprint.

Experiments should begin now, Bengio said, in part to address the challenge of recreating social experiences on par with meeting in person or striking a balance. Some events could combine in-person attendance with digital, while conferences rapidly growing in popularity like NeurIPS may host more regional events.

Invited speakers at the Animal Crossing workshop will present their work on one Animal Crossing island, but to inject impromptu meetings into the process, in between presentations attendees will get Dodo codes to go to coffee break islands to chat with about 5 people. Each island will have themes for people with similar interests, like computer vision or NLP, to discuss workshop subject matter or whatever else comes to mind. If 200 people show up, he expects to need around 50 islands. He said keeping track of attendee Dodo codes for interest-specific islands may be one of the biggest technical challenges to pulling off an Animal Crossing workshop.

Zoom, Twitch, Google Meet, or another service will be used to provide sound for speakers, as well as a way for people to watch presentations inside Animal Crossing whether or not they have the game.

Austin Parker organized the Deserted Island DevOps workshop, a similar event that took place in Animal Crossing Thursday and attracted thousands of viewers on Twitch. He told VentureBeat forming community to do things like organize “hallway track” side conversations was easy, but tasks like finding moderators in an extremely open community was a challenge. 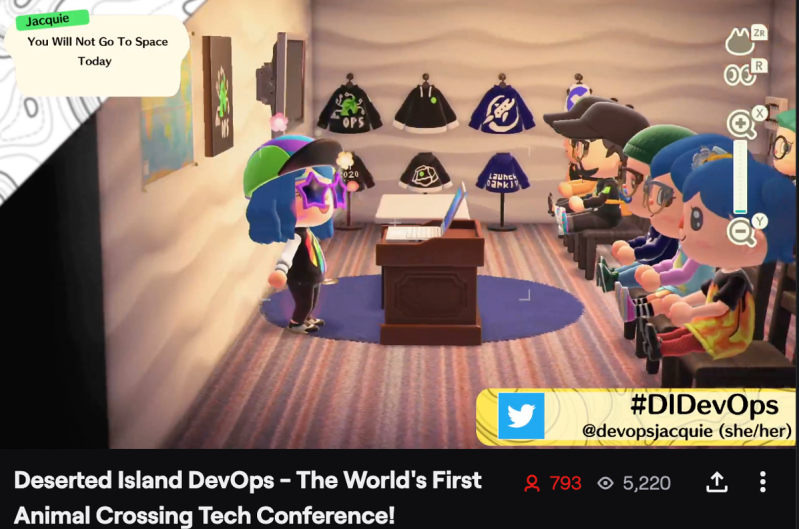 Eisenberg said the Animal Crossing AI workshop (ACAI) is designed to be accessible to people who don’t normally attend conferences and aims to be as fun as it is educational.

“The draw for these conferences is the networking and the chance social interactions, not the raw knowledge. Like, a 20-minute presentation isn’t going to teach you everything about an AI paper that’s someone devoted a year of their life on … that’s not the point. You’re not there to go back to school, you’re there to meet people and to talk and to share ideas in a social manner, so I think the social aspect of these things are the most important,” he said.

The format for research conferences online is important because the work of scientific communities in machine learning and fields like health care and life sciences can influence which ideas and methods gain traction.

What ICLR and ACAI have in common is they reflect a collective need to connect and learn.

Nothing replaces being there. The ICLR conference, for example, was originally scheduled to take place in Ethiopia this year, and though African perspectives were put front and center in some conference content, there’s no replacing being in that place. Being there also means you can stay in the moment. Keeping locked in for a week of online content can be tough.

It may be a long time before researchers have the pleasure of cramming into hotel conference rooms shoulder to shoulder again, but even if a cure for coronavirus arrives tomorrow, experiments in digital conference events — particularly social aspects — should continue as a way to increase access, lower barriers, and bring more people into the process.

For AI coverage, send news tips to Khari Johnson and Kyle Wiggers and AI editor Seth Colaner — and be sure to subscribe to the AI Weekly newsletter and bookmark our AI Channel.