Ever since COVID-19 began wreaking havoc in China, multiple Chinese and American companies have been rushing to popularize wearable thermal scanners that can quickly detect a key symptom — elevated body temperature — in public places. Now the busiest airport in Italy, Rome’s Aeroporti di Roma-Fiumicino, says it’s the first in Europe to adopt a “smart helmet” that uses augmented reality and a thermal scanner to screen visitors, enabling the facility to keep sick people off planes.

Similar to a motorcycle or police riot helmet in design, the N901 smart helmet is made by Shenzhen, China’s Kuang-Chi Technology, and looks intimidating from the outside — quite unlike the lightweight pairing of Vuzix’s M400 AR glasses and Librestream’s Onsight Cube feted in March. A wearer’s eyes are covered by a tinted and/or mirrored lens, while a large external thermal scanning camera points forward.

While screening devices like the N901 will have obvious value in helping businesses and public places to more safely reopen, the military-like design could be off-putting to travelers. The sleek helmets have been described as Robocop-like, working in conjunction with separate masks to dehumanize the wearer. On the other hand, the large lens hides a highly functional color waveguide display, which can be used to simultaneously screen numerous people at once, automatically triggering sonic and visual alarms whenever someone registers a potentially dangerous temperature. 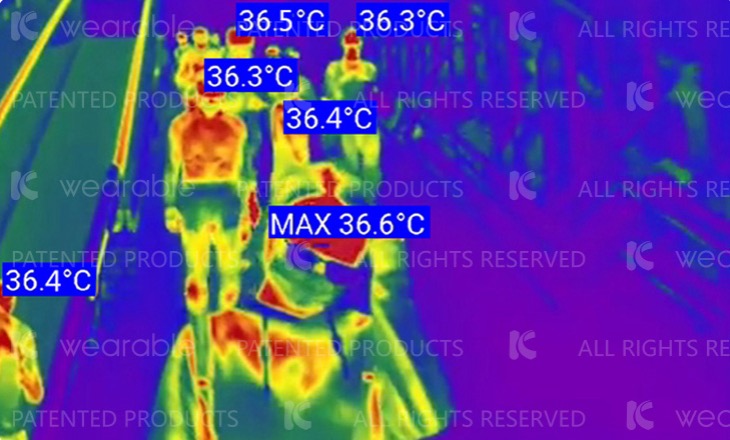 While there’s also a single-person temperature measurement mode, the “large crowd” version shows the wearer both a real time heatmap and maximum temperature readings keyed to multiple individuals identified by the Android-based hardware and software. Thermal measurements can be taken at safe distances in the 8- to 15-foot range, while a traditional optical camera paired with 5G, Wi-Fi, and Bluetooth hardware can be wirelessly connected to a database for facial recognition. As a result, N901 wearers can move through crowds and perform mass scans rather than standing in a fixed position screening one person at a time, conceivably slowing the progress of security lines in the process.

Rome’s airport is currently using three of the N901 helmets, with plans to add additional units as passengers begin to travel again. It remains to be seen whether Kuang-Chi’s solution takes off in other airports, but its collection of thermal, optical, and wireless features — as well as its ability to work at up to twice the distance as some rivals — will likely help its appeal to other airports, as well as businesses looking for quick thermal screening solutions.