The announcements were made at Shopify Reunite, the company’s first virtual event. The Canadian company was supposed to host the fifth installment of its annual partner and developer conference, Shopify Unite, in Toronto earlier this month. In late February, Shopify canceled the in-person element over COVID-19 concerns and then ultimately decided to cancel the whole event altogether. But the coronavirus pandemic has been a boon for the company and other Amazon rivals. Shopify thus decided to share some updates with its worldwide customers, partners, and the broader public. We talked to Shopify chief product officer Craig Miller ahead of the event to get some more color on all the news.

“If we’re going to broadcast to the world, we may as well broadcast to the larger Shopify audience, which is something we’ve never been able to do,” Miller told VentureBeat. “Unlike Unite, where we talk to a smaller audience, Reunite is our first chance to really talk to our million plus merchants. And talk to them about the products that we’re launching in 2020 — some that have already come out and some that are coming out over the coming months.”

The biggest announcement is arguably that Shopify wants to offer merchants financial products to start, run, and grow their businesses. The company does not want to become a bank per se, but it’s clearly interested in dipping into the fintech stream — an increasingly common trend for tech companies and ecommerce platforms. Shopify spans both.

The Canadian company argues that most of today’s banking products are “designed for large, established businesses” rather than “independent business owners,” aka Shopify customers. In its own research (a survey of 649 U.S. merchants), Shopify found that two in five merchants are currently using their personal bank accounts and cards for business.

Merchants should separate their personal and business finances, Shopify says. Shopify Balance will launch in “early access later this year in the U.S.” The company chose an America-first launch as the majority of its merchants are based in the U.S. “Timelines are a little bit trickier these days, but the plan is for Shopify Balance to be available in many more countries,” Miller said.

An unnamed third party will provide the infrastructure to handle transactions in the background so merchants get their money immediately. “They get access to the money that they’re earning from the Shopify store within the same day that they earn it,” Miller said. When asked, he said the partner will be unveiled when Shopify Balance launches.

Shopify Balance comprises an account, a card, and rewards. Shopify Balance Account is “the business account built for independent businesses and entrepreneurs.” In Shopify admin, merchants will be able to see cash flow, pay bills, and track expenses. Miller also promised a “super instant setup so you don’t have to fill out any, crazy forms like you do if you were to set up a business bank account.”

Shopify Balance Card can be a physical card or a virtual card. Merchants can use it to access their money by spending in-store, online, or via mobile. “They will get a debit card in the mail that they can customize with their company’s brand on,” Miller said. “As well, they’ll get a digital version that they can use to start spending online instantly.” Merchants will also be able to withdraw from ATMs. As for rewards, Shopify plans to offer merchants “cashback and discounts on everyday business spending like shipping and marketing.”

“As we started looking at traditional banking, we also realized that there’s the consumer side as well,” Miller said. “Today, with the unemployment numbers going up quite high, with people being concerned about potentially taking on debt, interest rates with traditional credit cards are actually quite high. That kind of led us to also try and get our installments product out there.” 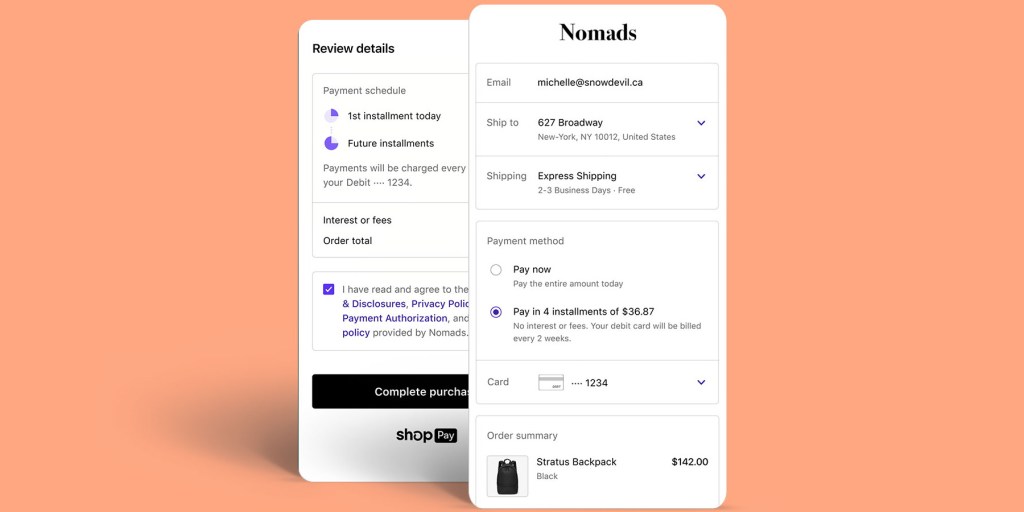 Later this year, Shopify will launch Shop Pay Installments, also only available to U.S. merchants. Consumers can split purchases ($50 to $1,000 including taxes and shipping) into four equal payments over time, interest-free and with no additional fees, Shopify promises. A consumer could make, for example, a $400 purchase and pay it off over four months in $100 installments. But the merchant would get the $400 immediately.

Like every savvy salesperson, Shopify argues that flexible payments can make purchases more palatable to consumers. But the company goes further, noting this is particularly true “in the current economic climate” and that merchants stand to see an increase in average order size.

Shopify is once again leaning on a partner to make Shop Pay Installments happen. Again, Shopify says there will be no interest and no additional fees for Shop Pay Installments. We asked Shopify whether this partner is the same one as for Shopify Balance. “Once we get around to disclosing those, I’ll let you know for sure.”

Shopify says the coronavirus pandemic has boosted local shopping. Average daily local orders on Shopify for the six weeks ending April 24 grew 176%, compared to the prior six weeks, which the company attributes to the introduction of physical distancing measures. As of April 24, 26% of brick-and-mortar merchants in Shopify’s English-speaking geographies were using a local pickup and delivery solution, compared to just 2% at the end of February.

“Over the past probably six weeks or so, we’ve noticed a huge amount of local orders,” Miller said. “Previously, commerce was about the infinite selection you can get. Increasingly now it’s about supporting the merchants that they know and they love that are nearby.”

Shopify is rolling out a new Local Delivery product for merchants globally. Merchants can define a local delivery area using distance radius or ZIP/postal codes, set local delivery fees and minimum order price, and fulfill local orders through Shopify, Shopify POS, and Shopify Mobile. There is even a dedicated Shopify Local Delivery app. Its main purpose is to create optimized delivery routes, but merchants can also send customer notifications when deliveries are on the way.

Additionally, there’s now an option that lets a merchant act as their own delivery person or have their staff act as a delivery person. They can bypass the traditional postal service and deliver the packages within their own neighborhood.

“And that’s useful for a lot of our existing merchants but also some of the new ones that we’re starting to see join Shopify,” Miller said. “We’re starting to see butchers, grocery stores, and restaurants as well. And I think what we’re seeing is just this wave of businesses that maybe didn’t sell direct to consumer.”

At Shopify Unite 2019, the company debuted the Shopify Fulfillment Network (SFN) in early access for two-day shipping. Select U.S. merchants could apply to use Shopify’s fulfillment network, which uses machine learning to predict demand, inventory allocation, and route orders to the closest fulfillment center. At the time, Shopify said it would spending $1 billion over five years on building out SFN.

“Last year when we talked the early access phase, we really wanted to make sure that we had all the systems and scale in place to handle Black Friday and Cyber Monday,” Miller said. “We were intentionally limiting the merchants in certain categories, certain times. We went through that without a hitch. Things performed flawlessly, we were really happy with it. And based on that, this year we said ‘OK, it’s time for us to now say the Shopify Fulfilment Network is much more ready for primetime.’ It’s available to merchants, much smaller and much larger, as well as different categories that previously we may not have supported.”

In September, Shopify acquired 6 River Systems, a startup focused on fulfillment automation for ecommerce and retail operations. We asked about the integration of the startup’s robots in the company’s warehouses.

In Ottawa, Canada, where Shopify is headquartered, Shopify is opening its first research and development hub. The hub will trial new robotics and fulfillment technologies, iterate and improve on warehouse operations, and fulfill Canadian-based orders.

As for retail, Shopify is always trying to figure out new ways to generate revenue at checkout. That is the whole point of the company. Because Shopify released plenty of retail updates in response to the pandemic, Reunite didn’t have too much to add here.

Shopify did, however, highlight changes that will help entrepreneurs adapt as businesses move online. Among those updates: Merchants can now collect tips at checkout, and there’s a new one-page theme called Express. While these features were designed for local restaurants and coffee shops, any merchant in any vertical can use them. In March, Shopify also let merchants sell gift cards, one way customers can support small businesses in these trying times.

In April, Shopify launched Shop, a shopping assistant app. Coming soon to Canada and the U.S., Shopify will let merchants debut a Shop Channel to control how their brand appears on Shop. That’s neat, but it’s no custom-branded debit card.