We don’t write about TV episodes much, but Mythic Quest: Raven’s Banquet is produced by video game publisher Ubisoft, and it’s a thoughtful comedy about a fictional game studio. And it is returning today on the Apple TV+ subscription service with special episode dubbed Mythic Quest: Quarantine, which was written, filmed, and edited in quarantine.

Rob McElhenney, the co-creator, executive producer, and co-star of the series, said in a press briefing that the episode came together in a matter of three weeks, with most of the writing done in just three days. The half-hour installment depicts what it’s like for the game studio’s staff to work from home. And it’s going to hit home for a lot of game developers.

I participated in a roundtable interview of McElhinney, after watching the quarantine episode.

To produce the episode, the cast and crew worked remotely in multiple locations across the country. McElhenney said his team consulted with Ubisoft to get real-world examples of game developers working from home. The episode sheds light on the challenge of mental wellness during lockdown, and it continues to straddle the dividing line between business and creative interests in a game studio.

McElhenney said the team will resume working on season two for the show, which has been greenlit. The first season of nine episodes debuted in February. I definitely think this whole series is worth a look for gamers and the game industry. I suggest you watch the quarantine episode first and read this afterward.

Here’s an edited transcript of our conversation.

Question: How quickly did this idea of a quarantine episode come together? What was one of the things that you wanted to avoid trope-wise when it came to the story?

Rob McElhenney: Well, from conception to final delivery was three weeks. It was very fast. The reason we wanted to do that was because we obviously wanted to drop it while we were all in this shared experience of being in quarantine, and we weren’t sure how long that was going to be. It does seem like it’s changing on an hourly basis. We felt like we should do everything we can to get this out as quickly as possible, and that’s what we did.

I think that would have been difficult, to pull that off under the best of circumstances. In these particular circumstances I’d say it’s the hardest production I’ve ever been a part of. But certainly it’s the episode of television of which I’m most proud, because of the way that it all came together through the work and ingenuity of an entire crew of people all working remotely.

In terms of the tropes that we wanted to avoid, we knew that we could take advantage, from a comedic standpoint, of some of the interface jokes that you were just going to get, because it’s an inherently funny way to communicate with people. However, we knew that we couldn’t just do Zoom jokes for 25 minutes. That would get old. It was already hacky by the time we started writing, because there had been a bunch of other shows that had already come on, SNL included, that did a great job right off the bat going live and exploiting that comedy. We thought, “Great, they did it, it was funny. Let’s figure out a way in which we can nod to that, but then tell an actual emotional narrative.” 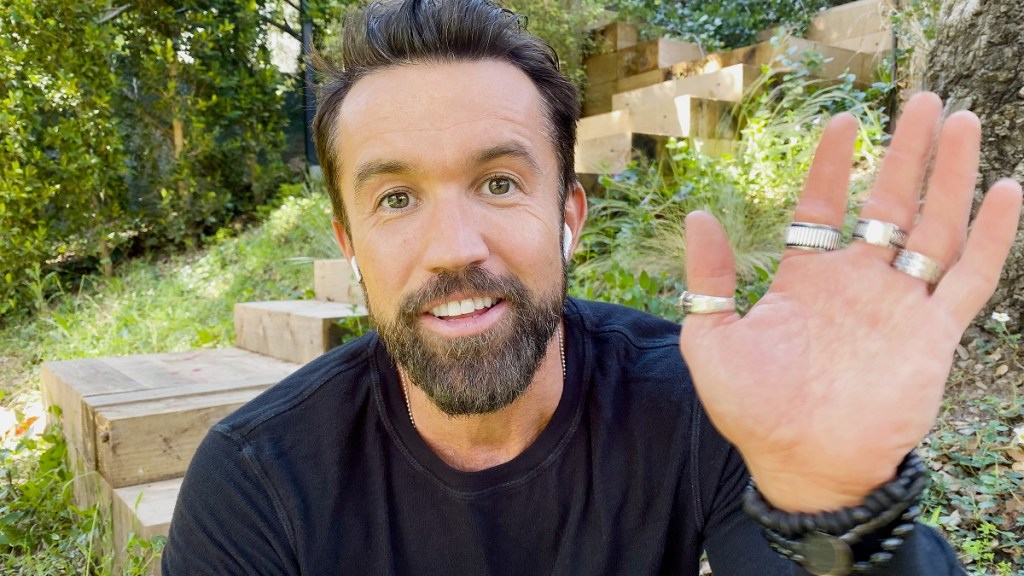 Above: Rob McElhenney, the star of It’s Always Sunny in Philadelphia, plays Ian in Mythic Quest.

Question: The episode speaks a lot to the mental health toll that quarantine is taking on many people. Why was that important for you to address?

McElhenney: We knew we could do something funny, and that would–I’m not saying that would necessarily be easy, but we knew we could achieve that, because as I mentioned, the interface itself, the situation itself, and the cast of actors that we have, we know that we could generate something funny. But we also felt like if we had this platform and this opportunity, could we tell a story that, at worst, brings a sense of levity and humor to people’s lives for 25 minutes? But at best, could make people feel less alone, which I think television at its best–stories at their best have the ability to do that. I know they do that for me.

It’s been interesting to me, how often I’ll get a text, a tweet, an email, an Instagram post from someone saying that they’ve been spending their quarantine watching Sunny, and thank you for the 14 seasons of episodes that just makes them laugh. “When things seem darkest, I know I can turn on this silly show and it’ll bring me some modicum of joy and humor for 22 minutes.” At best, those are the kinds of things we can do. Why not use that platform to the best of our ability to do it?

Question: When I was watching this, all I could think was, “Is this the future of Hollywood?” Are shows, for at least the next year, or even past that, going to be recorded from actors’ homes? Do you feel that’s actually going to happen, that maybe you’re a bit ahead of the game from standpoint?

McElhenney: The truth of the matter is we shot everything on the iPhone. At the risk of sounding like a commercial for Apple, we could not have done it without the technology of that company and those phones. This is not hyperbolic to say. It’s the truth. The camera in the most recent iPhone is better than the camera we shot Sunny season 10 on. It collects more information than we were able to do in Sunny season 11 as well. The ability for us to do this is both technologically based, but then also just simple human ingenuity and stick-to-it-iveness, and desire to make something great under not-so-ideal circumstances.

I hope that this is not the future of Hollywood. I hope that we can be back together working again on sound stages. But I just don’t know. Anybody that pretends to know is not paying attention. From my perspective, I always want to come up with a plan and be ready for the worst- and best-case scenarios, but at the same time we have to be respectful of what the situation is, the experts and the people out there who do this for a living. As a television writer, I am not one of those people, and I respect science and scientists. I’m going to listen to them.

Question: I was curious if you spoke to any video game developers on how they’re dealing with quarantine. If so, who did you talk to, and what did you learn?

McElhenney: Our production partner on the show is Ubisoft, which is one of the biggest game developers in the world. When we were talking about the possibility of coming back and doing some kind of episode in quarantine, we first reached out to Jason Altman, who’s an executive producer on the show and works for Ubisoft. We said, “Hey, can we spend a couple hours talking about what’s going on? How are people navigating through this?”

As we all know, people are at home, and they’re watching television, watching movies, and playing video games in record numbers. It’s one thing for a television series to be up and running. All that work has been done. Now it’s just about upkeeping Hulu or Netflix. But the video game industry, they have to still figure out ways in which they can keep these servers up and running with new content and players continually signing on in record numbers. How do they do that remotely? How are they navigating that? What toll is it taking on those people? These are all the areas that we wanted to delve into in the episode. 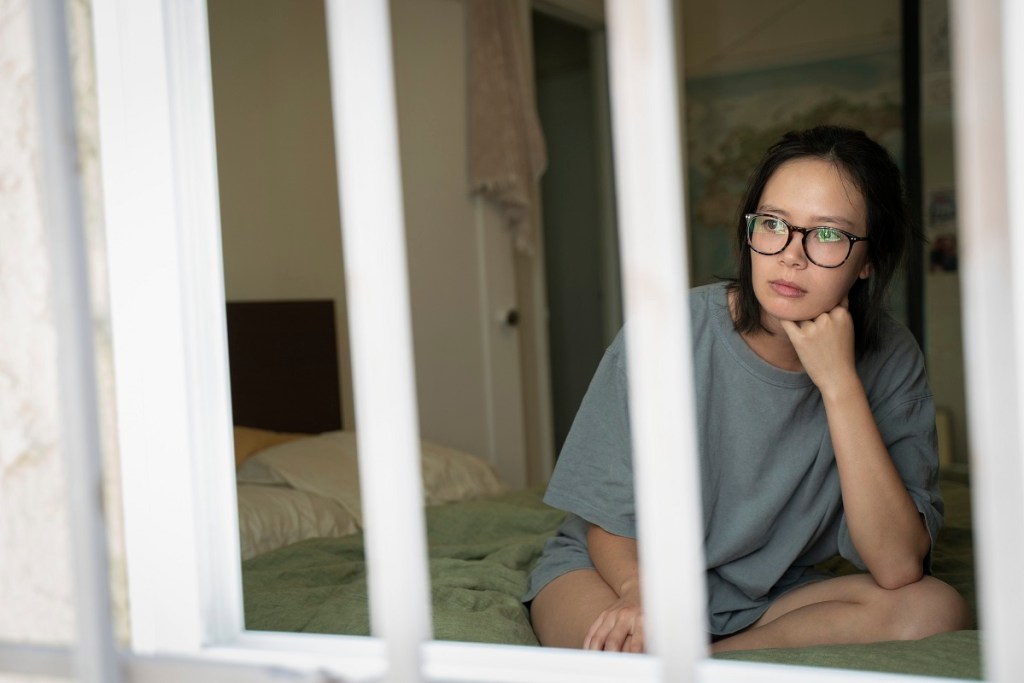 Question: One of the things I love about the show is the dynamic between the characters. When you were filming all the different locations, was it difficult to still have that witty dynamic? How were you able to portray that virtually?

McElhenney: That was tricky. What winds up happening is you realize things you never thought of before, which is how much of our communication is based on us being in the same room together. Whether that be non-verbal cues or just the nuances that you can only pick up from a person when you’re in the same room with them. Those are the things we had to navigate.

We’re all on these teleconferencing calls all day long, and there’s something eerie, uncanny valley about it all. You’re not really in a room with someone. Just because you can see them, it doesn’t mean you feel that connection. But we are used to talking to people on the phone. Everyone that’s alive right now has been alive since the advent of the telephone. We have a frame of reference for that, whereas we don’t with this teleconferencing. It’s still odd to us, or at least to my lizard brain. For us to be able to communicate with one another just hearing the sound of our voices, for some reason it helps click. Certainly emotionally, if not comedically.

Question: How did you figure out how to schedule this episode as a one-off, as opposed to something that might have been part of the second season? How much thought went into that part?

McElhenney: A tremendous amount of thought, but it had to happen quickly. From conception to final delivery was three weeks. We wrote it in about three days. The production on it, once we actually got shooting, was not that difficult, but the prep work that it took to schedule everything was the most difficult part. We had to get three iPhones per actor to each actor in a safe, legal, and sterile way. We then had to upload two very specific pieces of software to those phones. We had to walk them through how to operate all the settings, both audio and video. We had to do location scouting virtually, in their homes, to find the right places and times of day to shoot. We had to do whole tutorials on sound, because people live in homes with hardwood floors or concrete floors or high ceilings, and the echo, which you don’t hear on a normal basis, sounds awful when you record it.

These are all the types of challenges we faced, all while also asking them to perform and communicate with other various members of the crew. All without leaving our homes. Nobody left their homes except for me, and I left for one particular scene where I was walking outside, but then I just walked right back onto my property and into my garage, and the person on the other end of that particular exchange is not me, so that’s a body double. That body double is Charlotte’s real-life husband, who is not an actor by the way. He suddenly forgot how to stand like a human being.

He could hear me, because we were all communicating through these earbuds, and I was saying, “Okay, just stand there.” All of a sudden he forgot to do what you’re supposed to do with your arms when you stand as a human being. He started to kind of raise up in this robotic way. I was like, “Stop, just stand!” The poor guy was such a trooper, because he’s not an actor. He has no experience doing this, and all of a sudden he’s not only acting, but he’s pretending to be me. He’s a 6 feet 2 inch, 200-pound Australian man, and I’m not. He’s got me in his ear telling him how to stand. Those kinds of things were a tad dicey.