Sharks both fascinate and frighten me. I’ve loved learning about sharks, their evolution, and their place in the world for as long as I can remember. But at the same time, the longest recurring nightmare I have involves a great white devouring me (29 years and counting, thank you, brain!).

So it doesn’t surprise me one bit that Tripwire Interactive’s Maneater intrigues me. It’s an open-world role-playing game in which you play a shark, from baby to elder. As you grow, you eat everything you can find — such as fish, gators, seals, and people — as you explore the world and evade the shark hunters. Its framing is of a reality show following Scaly Pete, a veteran shark hunter who killed the star’s mother.

Maneater launched May 22 for PC on the Epic Games Store, PlayStation 4, and Xbox One (it’ll hit Switch later this year), and I enjoyed it for my review playthrough. It was a hoot to play as a shark, tearing through a bayou and eating every fish in sight. You also learn that there’s always a bigger fish, as you evade predators as a vulnerable pup. While absurd, Tripwire also hopes to teach you a little bit about sharks and their role in the ecosystem. And CEO and founder John Gibson talked about how you design a role-playing game around a shark — a unique task in the industry.

This is an edited portion of our interview from earlier this year.

GamesBeat: When you first started developing this game, when did you first decide to use a bull shark and make fresh water habitats for it?

John Gibson: When the idea came about — let’s make a single-player shark open-world action-RPG — we looked at what would be fun to play. There are areas that are in the deep ocean, but we thought that if the whole game was just the deep ocean, there wouldn’t be a diversity of environment. We want to be able to go into rivers and lakes, just to provide a diversity of environments to play in. So what sharks can go in those areas? And it was a bull shark. Those decisions came on very early, just in prototyping. What’s an area that’s fun to play in? It’s fun to play in a river. It’s fun to have some caves there. I’m not a golfer. What’s the little lake on a golf course? The ponds on a golf course? Water hazards. The shark is jumping from water hazard to water hazard to get where it wants to go. Those are just fun things conceptually, when we thought of them. Yeah, a bull shark will be able to do that.

GamesBeat: Who came up with the idea to make a shark RPG?

Gibson: This started out actually as a game we were publishing. There was a developer named Blindside that’s run by a guy named Alex Quick. We signed the game up to publish. We have a long relationship with Alex. Alex was, back in the mid-2000s, the mod maker that made Killing Floor. We had formed a relationship with him back then, and we had bought the IP for Killing Floor from him. He got a good royalty deal and we co-developed Killing Floor. With the revenue he got from that, he started his own team, and they made the game Depth, sharks-versus-humans multiplayer. After he did that, he wanted to do something different. He said, I’m going to make a single-player shark game. He just started brainstorming and thought this would be something interesting to do. He came to us, and we thought, well, sharks could be interesting, but this is probably not going to be fun. We played his prototype build and said, wow, playing as sharks really is fun.

GamesBeat: It’s the absurdity that makes it fun, isn’t it?

Gibson: It’s that, and it’s the uncharted waters of — as a shooter developer, I’ve spent the last 20 years making first-person shooter combat fun, with guns and monsters that you’re shooting at and that are shooting back at you. And then when you take that all off the table and you have to make basically what is almost a melee space combat game, which is what the shark kind of is in the water — moving in 3D space and fighting with its mouth and tail and things it can pick up and throw, it’s a completely different design language. It was really enjoyable to tackle those challenges. 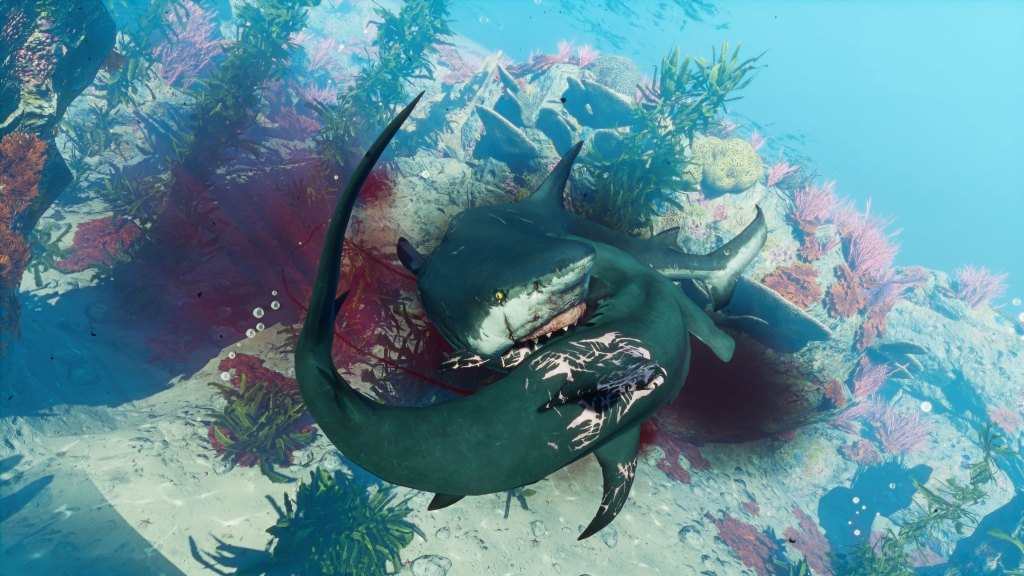 Above: ‘Cause everybody is shark-fu fighting.

GamesBeat: How hard is it to make a shark as a protagonist of an RPG, considering none of us know how being a shark is supposed to feel?

Gibson: We focused on that so much. I would say for it to feel really good, it took a year of iteration. As Tripwire started developing the game internally, the Blindside team had about five or six people, and we threw 50 people more at the game. Being an experienced developer, I think they were a little cocky. We’re going to make this feel great in a few weeks. Twelve months later we were still iterating. Little breakthroughs would happen from time to time, from our animators figuring out the right way to make the shark move, trying different things out with biting.

With biting, initially, you pulled the trigger or pressed the button and the shark would just statically bite. You’d move up to something, be a few feet away, bite, and it didn’t feel good. Then we came up with the concept of how shark combat should feel a bit like a sword fight, with lunges and jabs and forward movement. Then we tried that. Let’s make the shark move forward when it attacks. Little experiments like that added up to making the shark feel good. Having the audio team capture some really cool audio. We had some very interesting sessions using one of our developers’ pools to capture underwater sounds. All those things combined together and started to add up to a really good feel. When that happens, we call it creating magic, or finding the magic. When you reach the point in the development of a game where the lightbulb appears over your head and you’re hitting on all cylinders, not to mix my metaphors, it just gives you chills. We had that moment.

GamesBeat: What did you do in the pool? Because you can’t just go to an aquarium and say, hey, can we record some audio for our game?

Gibson: Throwing things in the pool. Having people scream underwater, so the sounds of the humans screaming are people in the pool, underwater, with a microphone, screaming.

GamesBeat: What about the shark chomping?

Gibson: The chomping is interesting. It’s a mix of a lot of sounds. Because a shark biting, a real shark biting, doesn’t make a lot of sound. It makes a bit of sound. But it has to feel powerful. It has to feel like you expect it to feel, not what it really sounds like. Not being the audio engineer, I can’t completely explain it. There’s some growls associated with the biting. Sharks don’t growl, but it feels cool if they growl when they bite. There’s a bit of lion in there, big cats in there.

GamesBeat: The whole idea about evolution is how you get the RPG into Maneater. Did that come from Alex, or did you come up with that?

Gibson: That started with Alex and we dialed it up to 11.

GamesBeat: At what point did mutagens and radiation become factors?

Gibson: If you allow me to use a Star Wars analogy, we don’t want to “midichlorian” the evolution. We don’t want it to be 100 percent clear why this is happening, at least not yet, in the Maneater story arc. But we wanted to place some things in there, like this is not a normal shark. Maybe it’s the radiation. Maybe it’s the mutagen. There’s something special here.

GamesBeat: You see the radiation from a reactor? 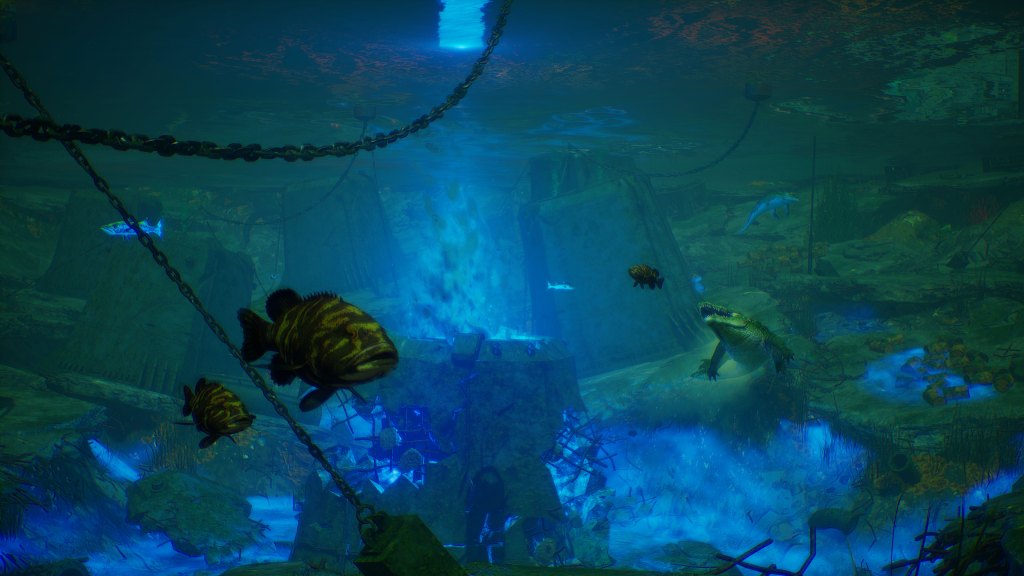 Above: Mudhole? Slimy? My home, this is.

GamesBeat: Shark loot: Did this idea come from Alex, or is that from Tripwire?

Gibson: I think that came about in some of our experimentation, just having some fun with it. We knew that we wanted exploration to be one of the key pillars of the game. But why is a shark going to explore? There has to be something for them to find. How about shark loot? How about crates? Not loot crates, because these aren’t DLC, microtransaction items, but crates or boxes, things in the world they can find that gives them some kind of benefits. Lots of new transfer, special evolutions that are hidden. That’s kind of where that came from.

GamesBeat: What’s the relationship between you and Quick’s team? Are you co-developing?

Gibson: We purchased the Maneater IP from Alex and the Blindside team. They get royalties on the game. But they worked with us along the way to create the game. Alex is a very creative designer. He’s also got skills as a programmer. Justin Knapich, who we previously worked with on Rising Storm in the past, great designer, great level designer. Chris Latham, who worked on the audio, getting his feedback. Really working as a team. If we purchase something and we have to spend a lot of money on it, we’re driving. But we’re also working very collaboratively with the original creators behind the game, because … those are talented people, and we want them to help make this thing great as we work together.

GamesBeat: You have three archetypes: electric shark, vampire shark, armor shark. How did you settle on these?

Gibson: A lot of it came about from watching people play, their playstyles. What can we do to augment their playstyles? You watch some people play the game, they jump in and go, go, go, attack, attack, attack, Rambo. How can we make that even more fun? Bone shark. Sharks don’t typically have bones other than their teeth, so give them bone armor on the outside so they can ram boats and destroy them. Give them more powerful teeth so they can rip into boats and rip into enemies. Some people wanted to go out and rile up a bunch of enemies and get 20 things attacking them at once. They want the coast guard after them with 20 boats. They want to swim through the water really fast and get 10 enemy fish coming after them and then fight them. OK, electric shock. It’s a great way to stun your enemies and deal with a large amount of people. Then there’s the explorers and the stealthy players who wanted to sneak up on people and quietly grab them out of the water and get in and get out. A little more tactical. Really seeing people play with those archetypes, we built the evolutions around them.