Mark Zuckerberg rarely offers an on-the-record opinion about anything to do with Twitter, though it’s not entirely without precedent. Yesterday, however, he walked right into the flames that have engulfed his company’s social media rival since it appended fact-checking labels to tweets issued by President Donald Trump.

According to Fox News, Zuckerberg responded to the incident in an interview by saying that private companies such as Facebook “shouldn’t be the arbiter of truth” for everything people say online, echoing similar comments he has made in the past. But Facebook has a long history of removing, labeling, and “downgrading” content, and Zuckerberg’s latest comments come in the very month that his company unveiled an “independent” content oversight board — dubbed its “Supreme Court” — that will be able to overturn the company’s decisions on whether individual pieces of content should be allowed to remain on Facebook and Instagram.

The Twitter episode kicked off on Tuesday, when Trump tweeted about California’s vote-by-mail plan for the upcoming presidential elections. The president opined that the state’s mail-in ballots would be “substantially fraudulent” and asserted that “mail boxes will be robbed, ballots will be forged & even illegally printed out and fraudulently signed.”

In response, Twitter — for the first time ever — affixed a fact-checking label to the president’s tweets, enabling users to click through to additional information from third parties. Twitter explained that it added the label as “part of our efforts to enforce our civic integrity policy” and said the company believed the tweets could “confuse voters about what they need to do to receive a ballot and participate in the election process.” 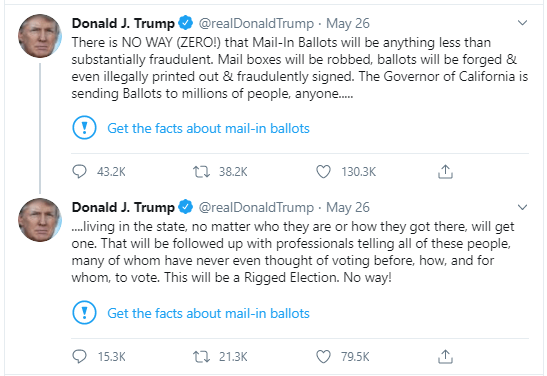 You may not use Twitter’s services for the purpose of manipulating or interfering in elections or other civic processes. This includes posting or sharing content that may suppress participation or mislead people about when, where, or how to participate in a civic process.

The fallout in the days since has been fierce, with Trump threatening to shut down platforms he accused of stifling conservative voices, while also promising an executive order that could make social platforms liable for content posted by their users.

Zuckerberg spoke to Fox News yesterday, in an interview that will be aired in full later today, and is quoted as saying:

We have a different policy than, I think, Twitter on this. I just believe strongly that Facebook shouldn’t be the arbiter of truth of everything that people say online. Private companies probably shouldn’t be, especially these platform companies, shouldn’t be in the position of doing that.

However, Facebook has very clear policies for combating voter suppression, similar to Twitter, and expressly bans “misrepresentations about how to vote.” Like Twitter, the platform also has clear policies designed to reduce the spread of misinformation with fact-checking labels. Facebook also routinely downgrades spurious posts that promote miracle cures, removes hate speech and deepfake videos, and implements initiatives to curb the spread of misinformation. A few months back, Facebook itself was forced to remove a series of “misleading” ads from Trump’s re-election campaign.

Twitter CEO Jack Dorsey responded to Zuckerberg’s comments by denying that its actions make it an “arbiter of truth,” adding that his company will “continue to point out incorrect or disputed information about elections globally.”

This does not make us an “arbiter of truth.” Our intention is to connect the dots of conflicting statements and show the information in dispute so people can judge for themselves. More transparency from us is critical so folks can clearly see the why behind our actions.

As Trump ramps up his attacks on social platforms in the coming days, weeks, and months, Facebook evidently wants to stay out of the firing line and distance itself from Twitter. But while they have their own distinct moderation policies, it’s clear both are active “arbiters of truth” on their platforms — whether Mark Zuckerberg likes it or not.