HP is unveiling new Omen and Pavilion laptops and accessories for gamers in self-isolation, which may stretch on longer after the difficult events of the past week. Online games have been a salve, first during the pandemic and now amid social unrest.

HP said its own study has found that 64% of people who started playing video games during the pandemic feel more hopeful. Meanwhile, 80% of gamers in the U.S. agree that playing games provides an escape, and 73% cite relaxation as the reason they play.

Once people start playing, they will probably want to upgrade to better hardware, either to win at online games or to experience more beautiful graphics. Whatever the reason, HP is ready to supply you with more stuff.

Omen is HP’s gamer-focused brand that competes with Razer, Dell’s Alienware brand, and other heat-seeking gamer hardware on the market. HP’s strategy is to deliver a balance of cool hardware and low prices to disrupt rivals and win over gamers. The new products come after HP unveiled a new virtual reality headset for both gamers and commercial users.

“We’re in very unprecedented times right now, and with the events unfolding around the world, we’re all living in the new normal,” said Judy Johnson, director of gaming and esports at HP, in a press briefing. “Now more than ever, entertainment is a critical part of our lives. Movies, music, and gaming have become stress relief, a welcome distraction.” 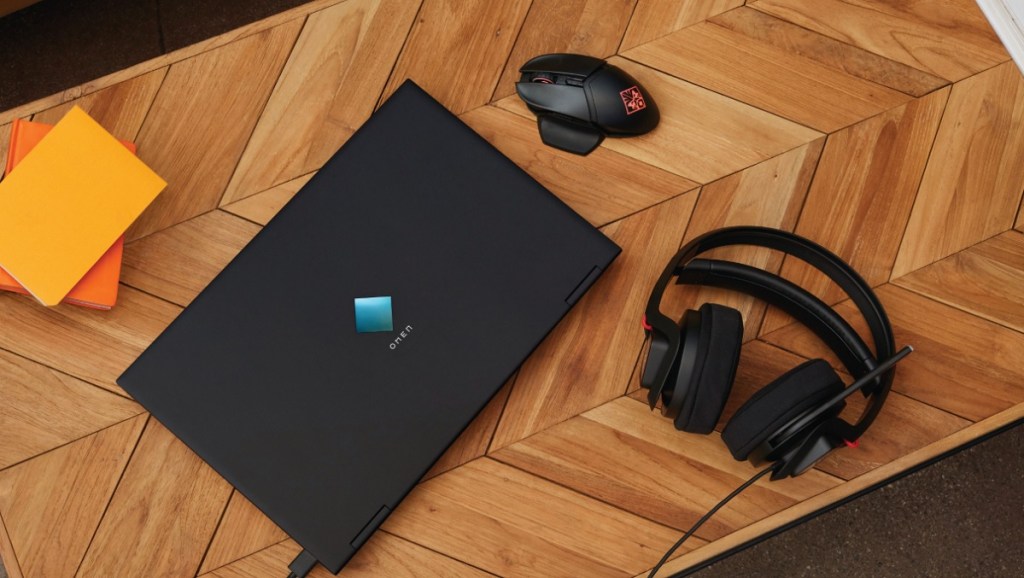 Above: I like the blue-green gradient on the HP Omen 15’s diamond logo.

HP is unveiling a new Omen 15 laptop, which has a smaller chassis than the previous generation and a new Omen diamond logo in a blue-green gradient.

The Omen 15 laptop comes in both silver and black, with optional full RGB per-key lighting on the keyboard. Additional features include Nvidia GeForce RTX 2070 Super with Max-Q, a 10th Gen Intel Core i7 H-series processor, and an option for an Advanced Micro Devices Ryzen 7 H-series processor.

The laptop has up to 32GB of DDR4 RAM, up to 1TB PCIe SSD or dual PCIe SSD supporting RAID 010 for fast load speeds, and a 15.6-inch diagonal display. The display has a new 180-degree flat hinge design for increased stability, with options for OLED, UHD 120Hz, or FHD 300Hz screens and Nvidia G-Sync technology. The Omen 15 also has an IR thermopile sensor to optimize thermal efficiencies and maintain steady and quiet fan acoustic control. You can set the performance level from the dynamic power feature within Omen Command Center.

Angelica Yang, a manager at HP gaming, said in a briefing that the sensor helps take the machine up a notch when it comes to thermal controls that enable faster gameplay. It uses Omen Tempest Cooling Technology to keep the machine cool, and it has enlarged vent openings and an up to 12-volt fan, which utilizes the three-sided venting to enable five-way airflow and push the laptop closer to desktop-level central processing unit (CPU) performance.

HP has also launched an update for the Omen Command Center. It has a new graphics switcher that enables a hybrid setting for battery life up to 12.5 hours — great for watching movies or working. Performance customization within the Omen Command Center makes it easier to control thermals and fan speed. And it includes a performance mode — yielding a 17% CPU and graphics processing unit (GPU) power boost. The Omen 15 is 8% shorter and 11% thinner than the past model. It weighs 5.4 pounds and makes for a balanced gaming machine in a compact package. 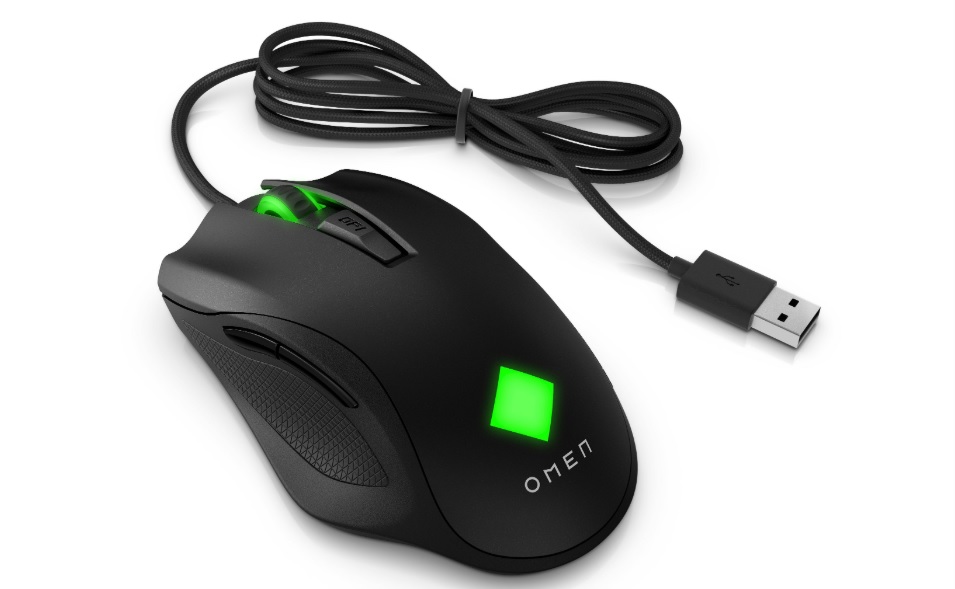 Above: HP Omen Vector Mouse is designed for high-end gamers.

HP is also introducing the Omen Vector Mouse and the Omen Vector Essential Mouse, both featuring sensors codeveloped with component maker PixArt. The mice are designed to be comfortable during long gaming sessions.

They both have ergonomic lightweight designs, textured rubber grips, and Omen Command Center integration to save preferred settings for RGB control for up to 16.8 million colors, six programable buttons, and high performance. 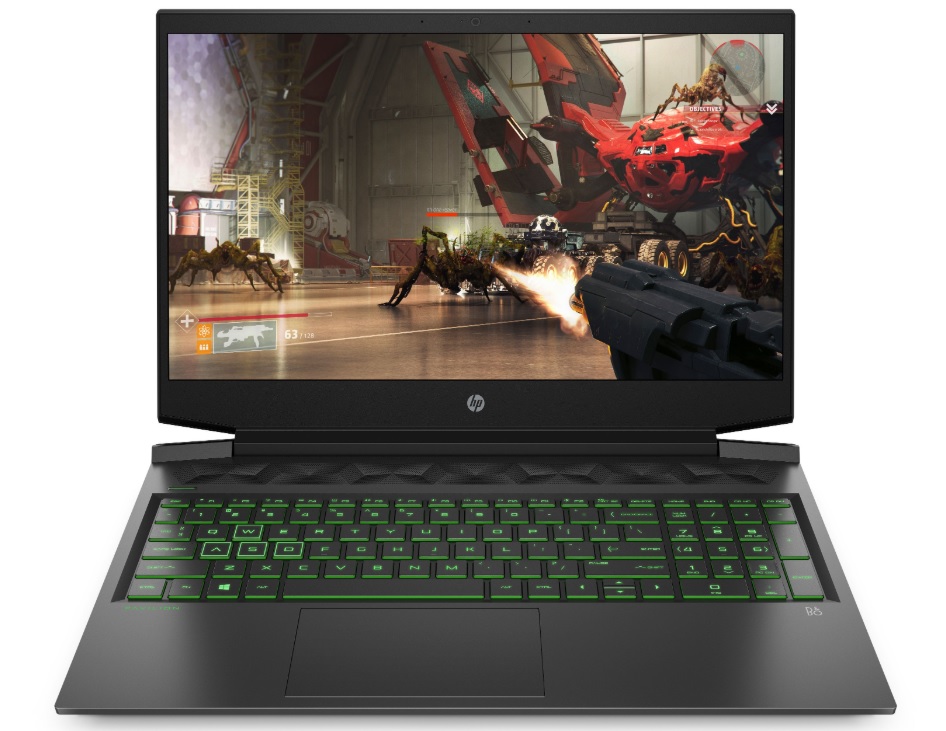 HP is also launching a new HP Pavilion Gaming 16 laptop for mainstream gamers. The company bills the machine as the smallest 16-inch gaming laptop below $1,000 and HP’s first-ever 16-inch diagonal gaming PC. It features up to 10th Gen Intel Core i7 processor and up to Nvidia GeForce RTX 2060 with Max-Q graphics inside an angular black chassis.

The IPS display has 300 nits of brightness, refresh rates of up to 144Hz at 1080p, and comes with Omen Command Center and Wi-Fi 6 networking. This is the kind of machine that needs a boss key so you can trick people into believing you’re working with just a key tap. If you’re someone who likes to play after a day of long Zoom sessions, you won’t have to change machines to do so. 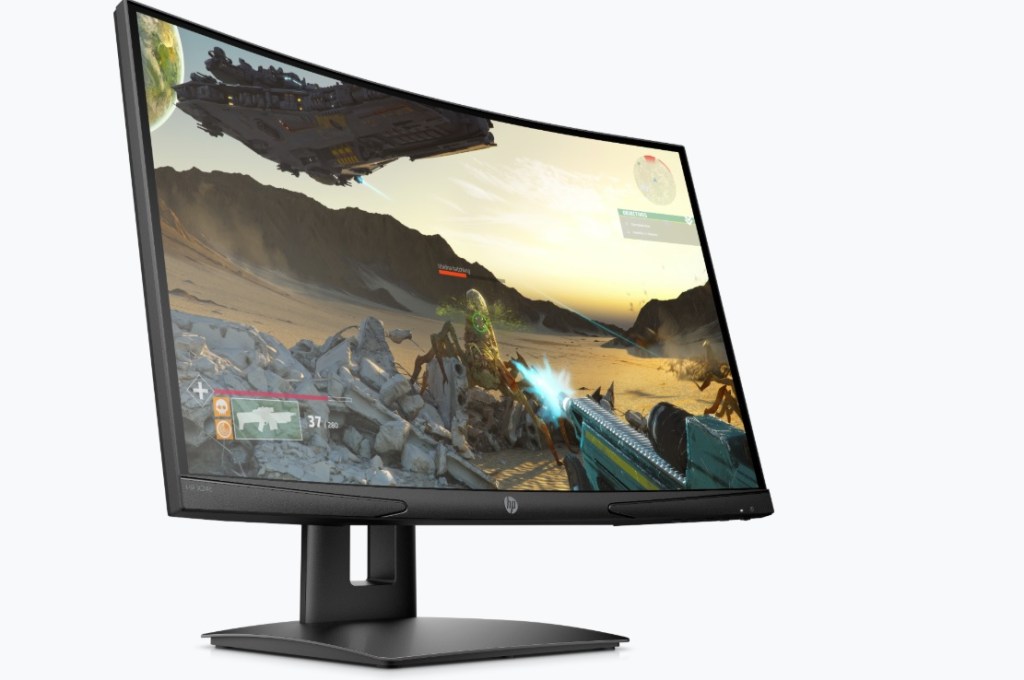 Above: HP X24c Gaming Monitor has a curved 24-inch screen.

It uses AMD FreeSync Premium technology, with a 144Hz refresh rate and 4-millisecond response time. An adjustable height stand helps you get through long gaming sessions. 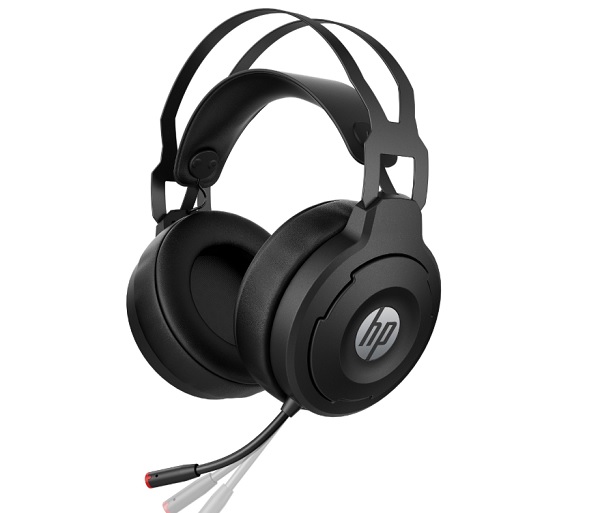 Above: HP’s X1000 Wireless Gaming Headset has a magnetic cup so you don’t lose the wireless dongle.

The HP X1000 Wireless Gaming Headset can run for 20 hours on a battery charge in wireless mode. It has thick ear pads and a suspension headband for comfort. The device also has 7.1 virtual surround sound, which is supported by a large 50-millimeter driver. You can easily access control buttons on the ear cups or via the Omen Command Center.

The brilliant thing about this headset is that it has a magnetic ear cup on the left so you can put your wireless dongle there and make sure you never lose it.

HP is also launching its HP Gaming Speakers X1000, an on-desk speaker with a 2.1 system with 30W RMS of continuous power and a subwoofer. It has RGB lighting options and adjustable EQ — both controlled within Omen Command Center.