Domino Data Lab, a startup developing a platform focused on enterprises with large data science teams, today announced that it raised $43 million in equity financing. It comes as the company introduces upgrades across its solutions portfolio, and as it launches a new suite of technologies — Domino Model Monitor — designed to prevent AI models from mistakenly exhibiting bias or degrading.

In general, a model’s accuracy will be at its best until it’s used, a theory known as concept drift. The statistical properties of the variable the model is attempting to predict inevitably shift over time. People’s preferences change, for instance, or a rival company makes a move that upends certain assumptions. Domino — whose customers include Dell, Allstate, UBS, Bristol Meyers, ConocoPhillips, and Lockheed Martin — aims to mitigate drift with products that automate various model-refreshing processes.

Domino’s Workbench enables engineers to leverage existing tools in tracking, reproducing, and comparing experiments while finding, discussing, and reusing work in one place. They can spin up interactive workspaces on hardware of their choice and scale to more powerful compute resources if necessary, all while using a built-in package manager to organize the libraries and tools tapped throughout a project and versioned data sets to track data used during model training and testing. The Workbench’s reporting features let admins schedule reports to be generated and delivered to stakeholders automatically, while data pipelines handle tasks to keep models up to date. And its on-demand launchers make analysis forms for business users to self-serve.

On the model operations side of the equation, Domino lets customers deploy models as on-demand APIs or export models for deployment on other infrastructure. Model Monitor detects data drift — the change in data that leads to performance degradation — and monitors the performance of models in the wild while alerting engineers to those that underperform. A complimentary registry shows the status of models at a glance regardless of where or how they were deployed, and integrations with Jira and other enterprise tools maintain the level of auditability — and security — required for regulatory compliance. 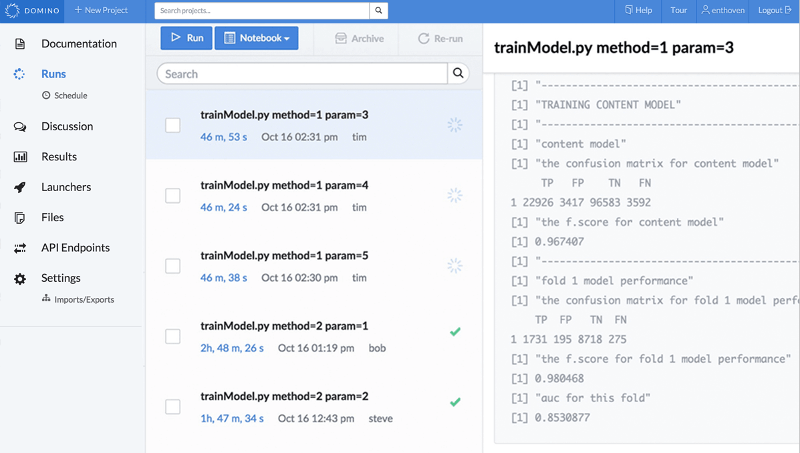 According to Domino, it’s not uncommon to see production models degrade in accuracy between 10% and 20% — particularly during turbulent socioeconomic times. “Now more than ever, companies need to be aware of changes to buyer preferences, economic changes, and other external factors outside their control that render their models obsolete,” a spokesperson told VentureBeat. “Domino gives companies the ability to detect … changes [using] a dashboard … [E]ven if they don’t want to monitor the dashboard, they can set thresholds so that … notifications can be sent out to notify key people that it’s time to either retrain it using updated data from today’s world, or completely rebuild it using a new algorithm.”

Domino also keeps tabs on compute and measures the business impact of model APIs, apps, and more as it surfaces project health in terms of both progress and potential roadblocks. Soon, thanks to recent updates on the platform’s backend, Domino will let clients make externally hosted Git code repositories (on GitHub, Bitbucket, etc.) the primary way of housing project files. And additional improvements are on the way, including on-demand Spark clusters for distributed processing, support for Kubernetes orchestration with Microsoft Azure and Red Hat Openshift, and the ability to export model images to Amazon Web Services (AWS) Sagemaker.

San Francisco-based Domino is targeting companies in insurance, financial services, internet and technology, life sciences, manufacturing, media and retail, health care, oil and gas, and banking in a bid for a slice of the emerging “MLOps” market. It’s seemingly well on its way; this latest funding round, which was co-led by Highland Capital Partners and Dell Capital, brings its total raised to over $123.6 million following a $40 million series D in August 2018.