AI and machine learning framework developer Streamlit today announced it raised $21 million in a financing round co-led by Gradient Ventures (Google’s AI-focused investment arm) and GGV Capital. The company anticipates spending the bulk of the proceeds on expansion and product development, and on laying the runway for the launch of its enterprise-oriented Streamlit for Teams offering.

Launching machine learning projects into production often requires stitching together internal tools. These tools can be difficult to deploy, require reasoning about client-server architecture, and don’t integrate well with existing constructs and platforms. Moreover, they require frequent maintenance on the backend, which dedicated teams are sometimes too overwhelmed to provide.

Spurred on by this, Adrien Treuille — a veteran of Carnegie Mellon, Berkeley, Alphabet’s X, and Zoox — cofounded Streamlit in 2018 with fellow former X engineers and product managers Amanda Kelly and Thiago Teixeira (who also spearheaded Google’s Hangouts Chat). A team hailing from Uber, Twitter, Stitch Fix, and Dropbox worked alongside them for a year to develop and launch the first few versions of the Streamlit platform in open source.

Within Streamlit, apps are local or server-side Python scripts that run from top to bottom. Each variable is assigned an up-to-date value given widget states, and Streamlit retains a cache primitive that behaves as a persistent data store, allowing apps to safely reuse information. Because the apps are pure Python files, they work with third-party editors and debuggers, and they interface seamlessly with Git and other source control software including commits, pull requests, issues, and comments. 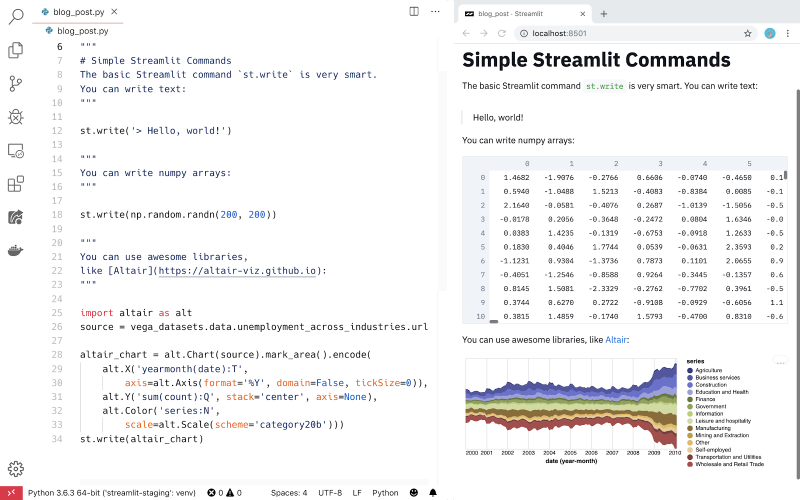 Above: Developing AI-powered apps with Streamlit.

Elsewhere, Streamlit provides a live coding environment that reflects when a developer makes changes to a source code file. It only recomputes whatever subset of pipelines are required to get to the right answer, allowing direct access to machine-level primitives like Google’s TensorFlow and Facebook’s PyTorch. And as of February, Streamlit has layout primitives for customizing apps’ visual elements and a component system that extends the platform’s capabilities in the browser.

To date, Streamlit says that over 200,000 apps have been built on the platform at some of the world’s largest companies. A data scientist at Delta Dental, for instance, developed an AI-powered app that analyzes call center traffic. Launching it internally took about three months — far less than the year Delta Dental anticipated it would require.

This latest investment in Streamlit follows a $6 million seed round in October 2019, and it brings the San Francisco-based startup’s total raised to $25 million.