Uber is opening up its platform with a partnership to bring on-demand public transport options into the Uber app. While the ride-hailing giant has long displayed public transit data and even enabled ticket purchases in some locales to help customers combine multiple forms of transport, today’s announcement goes one step further.

Uber will offer a new public transit option in partnership with Marin Transit, a public bus agency based in Marin County, California. This represents Uber’s first software-as-a-service (SaaS) partnership with any transit agency in the world.

Marin Transit has operated a subsidized on-demand ride-booking service called Marin Connect since 2018. It was available through a dedicated mobile app powered by Uber’s smaller rival Via. Through this latest effort, however, Marin Connect will be offered as an option directly inside the Uber app alongside the latter’s usual ride-hailing options.

Marin Connect will be available in and around the Highway 101 corridor in Marin County. It essentially offers a way for people to book a more affordable shared ride to a doctor’s appointment, the grocery store, or the nearest transit station. Fares are set at $4 per mile and are available on weekdays from 6 a.m. until 7 p.m. There is currently a maximum occupancy of two riders inside each six-seat vehicle due to social distancing measures. 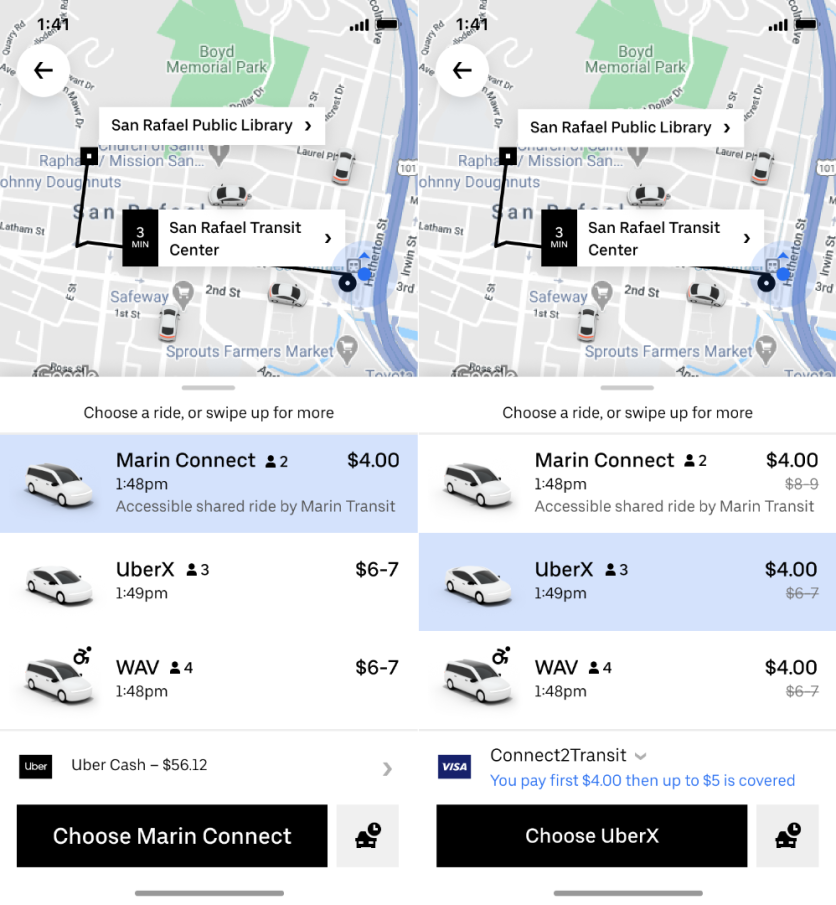 Above: Uber and Marin Connect

Crucially, Uber doesn’t charge a booking fee for the Marin Connect service, meaning all the money riders pay goes directly to Marin Transit. Instead, Marin Transit pays Uber a monthly subscription fee, as per most SaaS businesses, for access to Uber’s marketplace technology and customer base.

This is an interesting development on a number of fronts. It’s further evidence that the lines between public and private transport are blurring, but it also signals a new direction for Uber, offering another way to make money by tapping underused public transit fleets.