AI-powered digital therapeutics startup Kaia Health today announced it has raised a $26 million round. The funds will allow it to grow its existing solutions for chronic conditions and expand to new conditions while developing proprietary technology, investing in clinical research, and expanding its team, a spokesperson said.

Chronic pain — defined as lasting at least 12 weeks — affects hundreds of millions of people globally. In 2018, an estimated 20.4% of U.S. adults (approximately 50 million) reported experiencing long-term pain, while 8% (19.6 million) had high-impact pain stemming from headaches, arthritis pain, and neurogenic pain. Back pain is among the most common types, reported by 16 million adults. Equally prevalent is COPD, or chronic obstructive pulmonary disease, which is also estimated to affect 16 million adults.

Sufferers often pursue prescription drugs and in-person consultations, but Manuel Thurner and former Foodora CEO Konstantin Mehl sought less expensive and more sustainable forms of treatment. Their work led to Kaia Health, a five-year-old digital therapeutics startup whose apps leverage AI and motion-tracking technology to ease pain. Kaia launched in the U.S. in September 2018, following successful pilots in Germany and the U.K., and has generated a fair amount of buzz. It has attracted more than 400,000 users in four years and 100,000 downloads in Germany during its first year of availability.

Kaia’s mobile apps were developed with the help of physiotherapists, pain management physicians, orthopedic surgeons, and clinical psychologists and are registered as Class 1 medical devices with the U.S. Food and Drug Administration. They serve up video clips covering basic back and COPD pain information and physiotherapy exercises, in addition to psychological strategies like mindfulness and muscle relaxation.

During each of the over 120 15-minute exercises, in-app computer vision models — Motion Coach — track connective points on the body through a device’s front-facing camera while an on-screen wireframe model illustrates the steps. Audio feedback tells users whether they’re performing exercises correctly and how they might improve, and a built-in chat tool allows them to consult with a physiotherapist or sports scientist on questions related to specific moves.

Motion Coach only tracks 2D motion at the moment, but Kaia says it’s moving toward a 3D musculoskeletal model. The current version, which works with most iOS and Android devices and doesn’t require an internet connection, is available as a commercial software development kit for integration with third-party physical therapy, fitness, rehabilitation, augmented reality, and digital health apps. 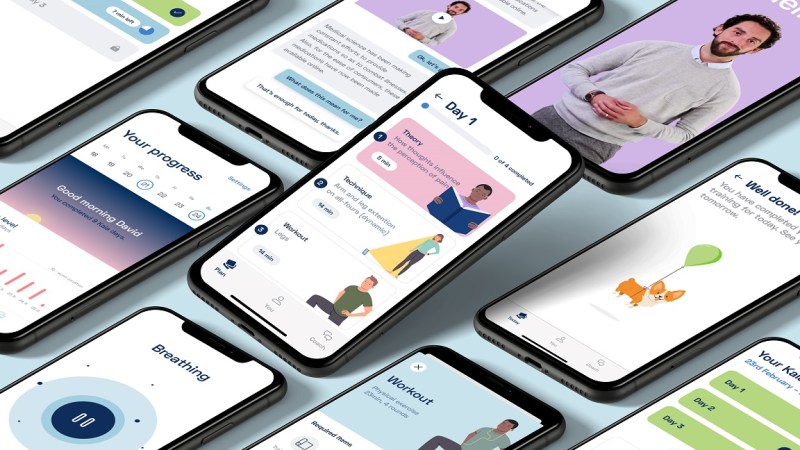 On the backend, Kaia offers a “digital biomarker” service that delivers the results of volunteers’ motion, balance, and stability assessments to pharmaceutical companies for targeting in clinical trial recruitment and disease progression tracking and monitoring. Using this same solution, health care providers can detect changes in patient health between visits, Kaia says, in addition to evaluating patients before their first visit and categorizing populations to identify high-cost patients. Meanwhile, insurance companies can individualize plans and track outcomes to support value-based reimbursement policies.

The apps aren’t free — subscription plans start at $24 for three months after a seven-day trial — but thanks to reimbursement deals with German health insurance carriers — including Barmer, Germany’s largest health insurance company — they’re available at no charge to tens of millions of patients.

Kaia claims about 40% of first-time users — some of whom come via employer plans from brands like Coca-Cola and NCH Healthcare System in Naples, Florida — continue to perform the exercises roughly 3 times a week for a minimum of six months.

Self-service meditation apps and offerings are all the rage lately. There’s Simple Habit, which competes with Headspace, Calm, Shine, and Digg cofounder Kevin Rose’s Oak. A few of these have a significant funding advantage. Calm raised $88 million at a $1 billion valuation in February 2019, while Headspace landed a $36.7 million round three years ago.

But despite their funding prowess, only a few of its rivals have been clinically validated, Kaia points out. In study at the Technical University of Munich’s Center for Pain Therapy and other “leading” institutions in Germany, Kaia’s app-based approach outperformed standard physiotherapy. Independently, Kaia users report an average pain level decrease of 43% over 12 weeks, according to the company.

Optum Ventures, Idinvest, and Capital300 co-led this latest round of funding, with participation from existing investors Balderton Capital, Heartcore Capital, and Symphony Ventures. This series B brings the New York-based startup’s total raised to nearly $50 million, following a $10 million investment in January 2019.