Activision Publishing announced that an all-new Crash Bandicoot 4: It’s About Time is coming on the PlayStation 4 and Xbox One on October 2.

Toys for Bob, the Activision-owned studio that previously worked on the Skylanders titles and the Spyro Reignited trilogy remake, is working on the game, which is sure to excite Crash fans who haven’t had a brand-new title in 12 years. Pre-orders are available now.

Shawn Layden, former head of Sony’s game studios, stirred excitement around Crash Bandicoot when he wore a Crash Bandicoot T-shirt at a Sony event in December 2015. Activision duly bowed to fan demand and launched the Crash Bandicoot N. Sane Trilogy remake in 2017. It followed that up with another remake, Crash Team Racing: Nitro-Fueled, in 2019. Word of the new game leaked over the weekend due to an early posting by the Taiwan Digital Game Rating Committee.

Crash Bandicoot was originally created by Naughty Dog for the original Sony PlayStation in 1996. The game was a huge hit and it led to a total of 18 titles, and it became Sony’s mascot character in its battle with Nintendo’s Mario during the original PlayStation era. The franchise cycled through a number of developers, from Naughty Dog to others such as Travellers Tales, Vicarious Visions, Universal’s affiliates, and others. Now it is a multiplatform title in the hands of Toys For Bob, based in Novato, California.

“We’ve gotten a lot of overwhelmingly positive responses to the remasters,” said Paul Yan, co-studio head of Toys For Bob, in an interview with GamesBeat. “But one thing’s really clear that I’ve heard is that fans want. They’ve had this great experience going down nostalgia lane, but it’s time for something new. It’s time for something original. And when we look back at the history of the franchise, it has actually been over a decade since we’ve seen a new original entry in the franchise.” 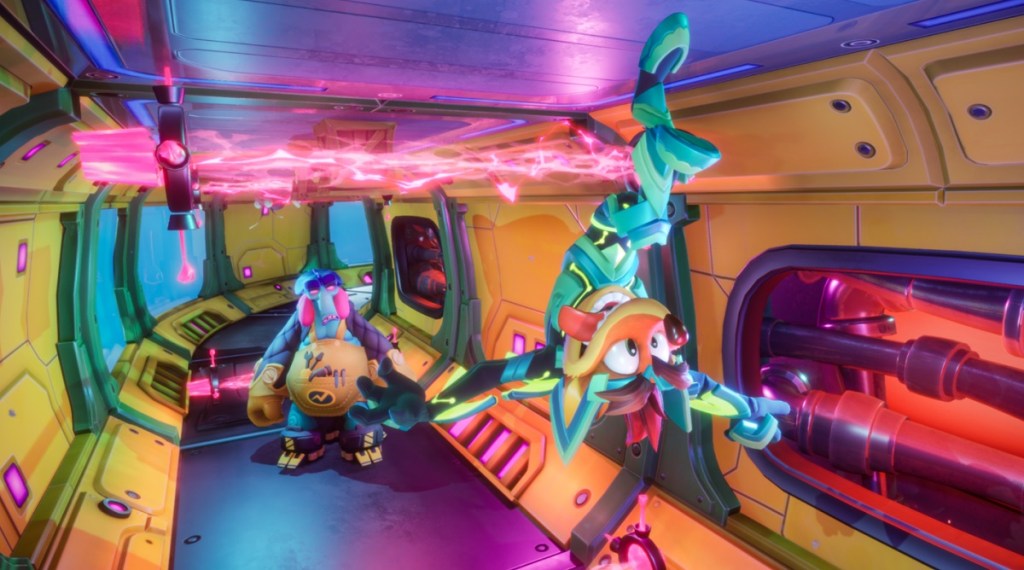 Yes, this game isn’t a remaster. As the name implies, it really is about time for a brand new Crash title, said Yan. On top of that, the gameplay has elements of time travel, allowing players to slow down time or bend the laws of physics to get past enemies or barriers.

“I’m super excited to finally take the wraps off what we’ve been developing for the last couple of years,” Yan said. “Technically, this is the eighth game in the series. But we’re deliberately calling this Crash Bandicoot 4 because we’re positioning this as a true sequel to the first three games.”

Yan said the first Naughty Dog trilogy was the high point of the series, both critically and commercially. Then it took off in a variety of directions.

“We wanted to go back to that original place where classic Crash gameplay was focused on precision platforming,” Yan said. “And that’s where the events in It’s About Time starts off.”

The absurd marsupial characters are back and putting a fresh spin on yet another cosmic conflict. Crash has to find four powerful Quantum Masks that must be united to restore order to the multiverse.

Toys for Bob is introducing a fresh art style for Crash to fans that maintains the zany spirit of the franchise while also breathing new personality and charm into it, Yan said.

Where it picks up 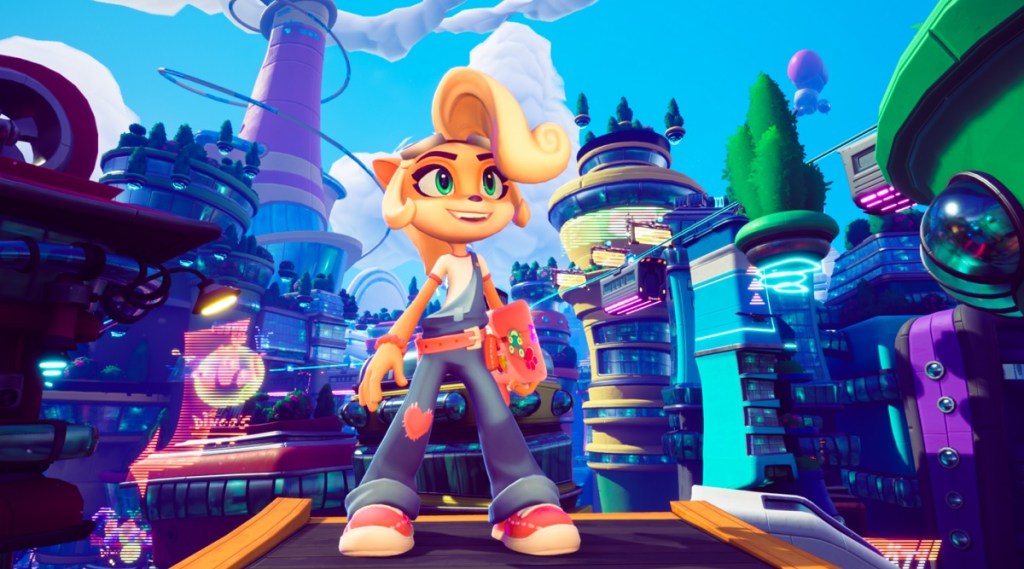 Above: You can play as Coco in Crash Bandicoot 4.

The game rewinds time back to the end of Crash Bandicoot: Warped, which came out in 1998. It picks up after Neo Cortex, Dr. N. Tropy, and Uka Uka were stranded on a distant planet. After decades of fruitless attempts, the trio finally make their escape, ripping a hole in the fabric of space-time in the process.

Now all that stands between them and total dominion over the multiverse are two fuzzy marsupials from N. Sanity Island — Crash and Coco, who is Crash’s younger sister.

In this adventure, players will uncover four Quantum Masks, the guardians of space and time, that will give them the ability to bend the rules of reality and gain advanced ways to conquer dangerous obstacles.

Today, the company is revealing the Time Mask, which slows everything down, and the Gravity Mask, which enables bandicoots to platform upside down.

As an example, you can slow down time to help Crash get past a Nitro crate. As it starts to explode, you have a small window of time when you can get around it and move to safety. The Gravity Mask gives you the ability to walk upside down on a wall or ceiling to get through impossible obstacles.

“The game is centered around time,” Yan said. “And we’re using this idea of being able to play alternate timelines as well.”

Fans will see an evolution of Crash, equipped with advanced gameplay mechanics like wall running, rail grinding and rope swinging. They’ll be able to play as new playable characters, including the fiendish Neo Cortex, who will provide an alternative perspective on Crash’s quest. You’ll see an explosion in the game from Crash’s view in one scene, and in another, you’ll experience it from Neo Cortex’s view. 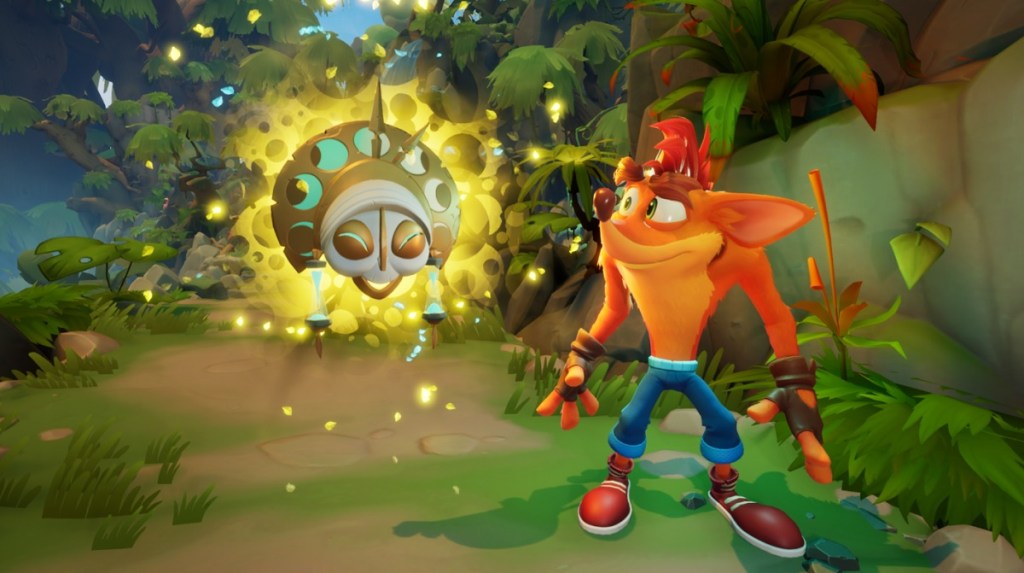 Toys For Bob started its work on the title after the completion of the trilogy remake in mid-2017.

Early on, Toys For Bob consulted with Activision’s Taylor Kurosaki, a former Naughty Dog developer now at Activision’s Infinity Ward, to get grounded in the Crash franchise. Beyond that, Toys For Bob had a lot of superfans at its studio. Toys For Bob also contributed some work to the both the N. Sane trilogy and Crash Team Racing.

“The most visually striking change is that we’re introducing a new art style,” Yan said. “It was really important for us to set apart the look from the remasters from this new game, creating a new future for Crash.”

The team also moved the camera out to widen the vistas so that you can take in a wider view when looking at the landscape. The Crash games were inspired by Looney Tunes cartoons, and the team wanted to keep the speed and humor of that inspiration. The game will also harken back to the first Crash game with a dimensional map, which will be the place you’ll go in between levels. In this map, you’ll be hopping back and forth between different times. 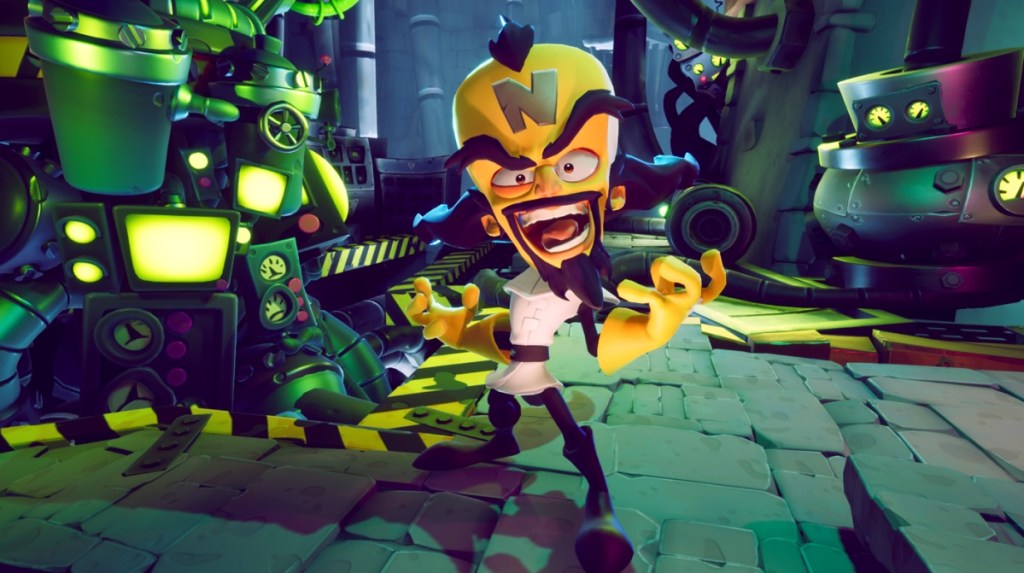 Above: Neo Cortex is a playable character in Crash Bandicoot 4.

“You can choose between the modes, but in modern mode, you’ll have infinite lives,” Yan said. “We’ve also added more checkpoints so that there are more places in which you can be more focused in getting past a certain hazard.”

To celebrate the reveal of Crash Bandicoot 4: It’s About Time, Activision has teamed up with hip hop star and fellow Crash aficionado Quavo, from the music trio Migos, who will debut the world’s first sneak peek via his social channels. The game will cost $60.