Teenagers who use the virtual gaming world of Roblox say that they are using games such as Roblox to stay in touch with their real-life friends, according to a survey by the company. They’re also playing online games a lot more, and they’re going online with their parents’ permission.

Roblox found that 52% of teens spend the same or more time with real-life friends in Roblox, other online games, or voice/chat programs during the pandemic. San Mateo, California-based Roblox has more than 120 million monthly active users, and the company said that 69% of those surveyed are playing more on Roblox because of more time at home and parental approval for online learning. Roblox’s players generate roughly 2.5 billion hours of engagement per month.

Roblox surveyed nearly 3,000 teens in mid-May as part of the company’s Digital Civility Initiative. The majority of respondents say they like to play their favorite games (79%), try out new games (64%), and also have conversations (62%), emphasizing the importance of social interactions as part of their experience on the platform.

Laura Higgins, director of community safety and digital civility at Roblox, said in an interview with GamesBeat that 40% of teens say that they have improved their online friendships during the pandemic.

“We definitely saw an uplift in the platform,” Higgins said. “Screen time has gone up for all families. Adults have more understanding now. People are socializing online.”

Why online life is better 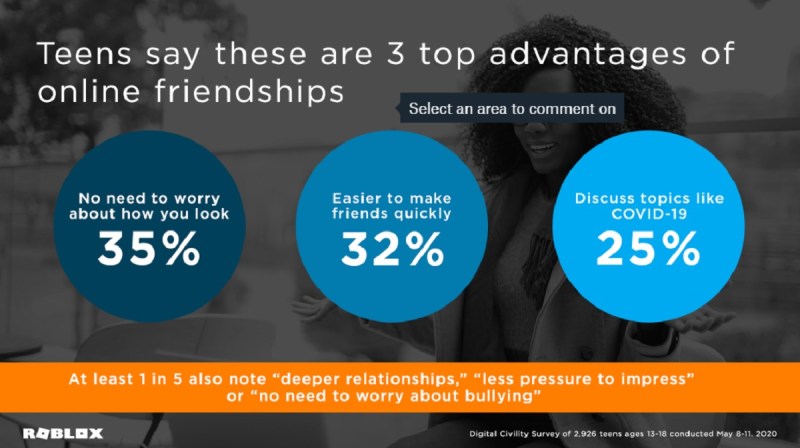 During COVID-19, teens surveyed are currently hanging out more with their online Roblox friends (56%) compared to their real-life friends (44%).

Among the top advantages of online friendships, they list acceptance without regard for appearance (35%) and the ease of making friends quickly (32%). Teens also note they can lean on their online friends to discuss difficult topics such as COVID-19 (25%).

“They’re choosing spaces online where they can sit and socialize and hang out with their friends,” Higgins said. “Teens love being able to talk to people from different countries and from different cultures and sharing that and even to the point of learning languages from each other. They are going out of their way to hang out with their real-life friends in online platforms.”

Teens said they don’t worry as much about how they look anymore, and that is one less reason they might be bullied, Higgins said. Teens are also experiencing the Roblox community at large as more helpful (44%), friendly (34%), and patient (26%).

“The relationship changes were surprising,” Higgins said. “Online relationships are getting better. There is less pressure on how you should act. The young people are finding others are more patient or more helpful and it felt a bit more positive.”

Stay-at-home time sparked interest in trying new things. While the vast majority of teens surveyed (79%) continued playing their favorite games together with their real-life friends, when asked whether they were doing anything different on Roblox during stay-at-home orders, over half (62%) said they were trying new games, and 41% tried new game genres.

Over a quarter (29%) of teens reported that they started building their own games or learning how to code during this time.

“That’s that’s obviously fantastic that they are willing to try new things and learn new skills,” Higgins said. “Increasingly we’re seeing teens take up everything that we have to offer. So people are streaming live events within Roblox, and people are hosting events and parties and things like that. We want to continue building on that.”

Parents are chilling out 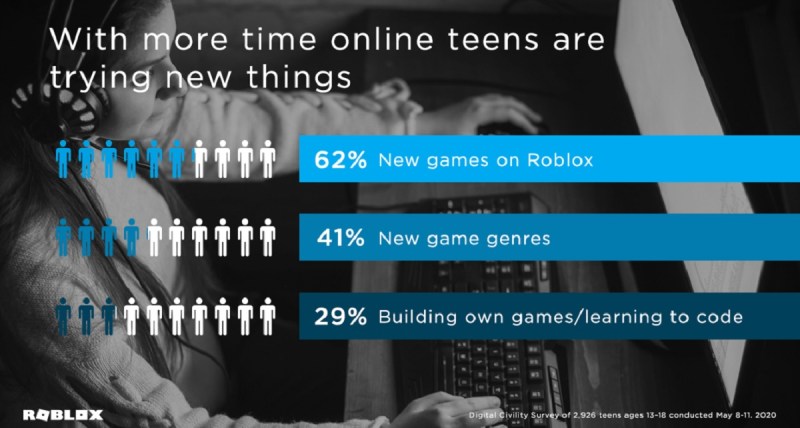 Above: Roblox says kids and teens are experimenting more online.

Social distancing has caused an increase in time spent online: 44% of teens report getting more screen time because their parents aren’t being as strict.

While it’s expected that parents would be less concerned about screen time during physical distancing, the survey also reflected a very positive trend in parent-teen relationships. Nearly a third of respondents (30%) say parents are showing more interest in their online lives, including learning about and playing Roblox with them.

“The lovely thing that came out is that parents are just less worried now, and we’re spending more time collectively, online,” Higgins said. “I think we’ve demonstrated that young people are still really resilient. We need to keep supporting that we’re helping them to stay safe, but also to be part of this really healthy community.”

Parents are getting involved with their kids’ online lives 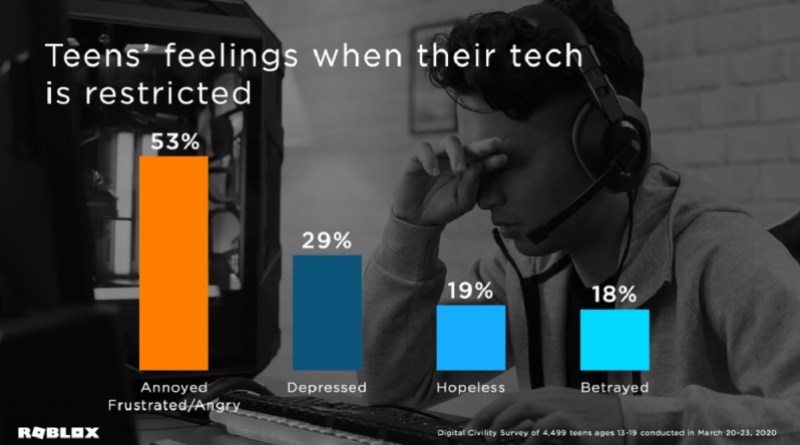 Above: Teens get upset when parents limit their screen time.

In an earlier Roblox study conducted in March (4,499 teens ages 13-19 conducted by Reach3 Insights in March 20-23), 68% of teens said they wanted their parents to be more involved in their online lives. One in five teens (21%) say their parents also trust them more when it comes to who they speak with online.

Jordan Shapiro, a researcher on game-based learning, said that this points to the notion that kids want joint-media engagement. That is, they want their parents to take an interest in what the kids are doing online. This is a way for parents to be more empathetic, supportive, and responsive as parents.

But Higgins said that the usual approach from parents is to stay distant from the online play and restrict online time. But 53% of teens say they feel annoyed or frustrated or angry when their tech is restricted. 29% say they are depressed, 19% say they are hopeless, and 18% feel betrayed when parents prevent them from going online.

“Parents were used to taking devices away and turning Wi-Fi off,” Higgins said. “In the recent survey, they weren’t doing that. In another survey last year, young people were very clearly saying to us they want to keep their parents more involved in their online life. And actually, what came out in this survey is that over 30% said their parents are now more involved. Now, maybe that’s circumstances because we’re all thrown together in the same space. But actually, parents are now starting to play the games with their kids and teens, which is what those children wanted. So I really hope that that’s one of those things that will continue.”

She added, “When we get used to the new normal, whatever that might look like. I really hope that parents continue that relationship because you can only be a positive thing for them if you are interested and involved.”

Back in the March study, 65% of teens said they experienced having their devices taken away or Wi-Fi turned off by their parents to combat online usage. The vast majority (75%) of teens surveyed identified a range of emotions: anger, betrayal, depression, and even hopelessness.

As part of its Digital Civility Initiative, Roblox conducted its May survey of 2,926 teens ages 13-18 via Reach3 Insights from May 8 to May 11.