Ahead of the commercial rollout of its driverless trucks by 2024, TuSimple today outlined the launch of what it’s calling the world’s first autonomous freight network. In partnership with UPS, Penske, U.S. Xpress, and McLane Company, TuSimple plans to establish an “ecosystem” of autonomous trucks, complemented by digitally mapped routes, strategically placed terminals, and a monitoring system dubbed TuSimple Connect.

The company believes the autonomous freight network is the “safest” and “most efficient” way to bring self-driving trucks to market. Indeed, as the pandemic drives unprecedented growth in the logistics and ground transportation market, Aurora, Waymo, and other rivals are also investing increased resources in fully autonomous solutions.

TuSimple’s autonomous freight network will roll out in three phases. During the first — 2020 to 2021 — the company will offer delivery service between Arizona and Texas, touching the cities of Phoenix, Tucson, El Paso, Dallas, Houston, and San Antonio. The second phase, which will begin in 2022 and end in 2023, will see an expansion in shipping from Los Angeles to Jacksonville, connecting the East Coast with the West Coast. The third phase, starting in 2023, will grow TuSimple’s driverless operations nationwide, adding routes in 48 states and allowing customers to use TuSimple-equipped trucks on the freight network (with priority given to existing customers and companies with large orders).

Similar deployments in Europe and Asia will follow if all goes well, building on a delivery pilot in Shanghai. There, as here, businesses will pay TuSimple to haul goods on their behalf.

TuSimple already operates autonomously on seven different routes between Phoenix, Tucson, El Paso, and Dallas, and it intends to open a shipping terminal in Dallas in alignment with its freight network plans. For high-volume customers, TuSimple tells VentureBeat it will continue to map routes and deliver to distribution centers. And it says it will give clients of all sizes the ability to track freight in real time using TuSimple Connect. 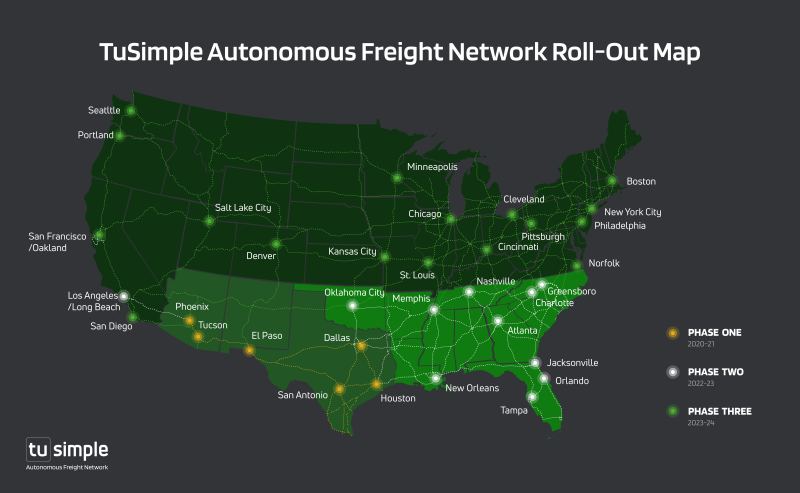 To accelerate the network’s growth, TuSimple completed a series of 22-hour self-driving truck runs along the I-10, I-20, and I-30 corridors through Arizona, New Mexico, and Texas. Leading up to today, the company was completing 50 commercial runs per week, and it now plans to conduct 93 commercial runs per week in the U.S., using 40 trucks.

Penske, which operates more than 750 service facilities throughout North America, has agreed to scale TuSimple’s fleet operations and provide maintenance and over-the-road service. U.S. Xpress and UPS will give TuSimple runs to haul for them, guiding which routes open next and enabling the company to further refine its autonomous technology.

TuSimple — which is reportedly seeking $250 million in new funding — is proposing an ambitious timeline, but it’s arguably better-positioned than most to deliver. The company recently expanded a freight-hauling pilot program with UPS to 20 trips per week, with additional routes between Arizona and Texas and El Paso and Dallas, and its trucks are performing revenue-generating trips for over a dozen customers, including Fortune 100 companies and “household names.” Moreover, TuSimple has global R&D and testing centers in hubs like Beijing, Shanghai, San Diego, and Tucson. It also has a war chest totaling over $298 million, with contributions from Sina, Nvidia, UPS, and Mando.

On the other hand, analysts like Boston Consulting Group’s Brian Collie now believe broad commercialization of autonomous cars won’t happen before 2025 or 2026, at least three years later than originally anticipated. Partly as a consequence of halted real-world vehicle testing, the coronavirus has delayed Lyft rival Waymo’s work by at least two months. Meanwhile, Ford pushed the launch of its driverless vehicle service from 2021 to 2022.

TuSimple’s Class 8 semitrucks can carry loads exceeding 33,000 pounds and are classified as level 4 under the guidelines penned by the Society of Automotive Engineers (SAE). This means they’re capable of full autonomy on controlled (and often geofenced) highways and local streets. Unlike self-driving perception platforms from the likes of Uber and Waymo, TuSimple’s system is decidedly camera-forward. Using an eight-camera array and other sensors, it can detect cars, pedestrians, and other obstacles up to 1,000 meters away.

TuSimple says it can achieve three-centimeter precision for truck positioning, even in inclement weather and at night, and its approach allows plenty of leeway for real-time decision-making. The company also claims its trucks are able to monitor traffic flow far ahead to maintain a given speed more consistently than human drivers and competing autonomous vehicle systems. It says this reduces fuel consumption by as much as 15% and average purchased transportation costs by 30%.

TuSimple has plenty in the way of competition, including Thor Trucks and Pronto.ai. There’s also Ike, a self-driving truck startup founded by former Apple, Google, and Uber Advanced Technologies Group engineers that has raised $52 million. And then there’s venture-backed Swedish driverless car company Einride. Meanwhile, Paz Eshel and former Uber and Otto engineer Don Burnette recently secured $40 million for their startup, Kodiak Robotics. That’s not to mention Embark, which integrates its self-driving systems into Peterbilt semis and launched a pilot with Amazon to haul cargo, or driverless truck solutions from incumbents like Daimler and Volvo.

But demand for driverless trucks is strong. The industry stands to save the logistics and shipping industry $70 billion annually while boosting productivity by 30%. According to a recent study from the Consumer Technology Association, a quarter (26%) of consumers now view autonomous delivery technologies more favorably than before the health crisis. Besides cost savings, the growth is driven in part by a shortage of human drivers. In 2018, the American Trucking Associates estimated that 50,000 more truckers were needed to close the gap in the U.S., despite the sidelining of proposed U.S. Transportation Department screenings for sleep apnea.