Mobile apps and game usage surged to the highest levels ever recorded — with games in particular scoring 14 billion downloads — in the second quarter of 2020, according to App Annie, the mobile data and analytics researcher.

The COVID-19 pandemic has dramatically altered life for everybody, and people are leaning on mobile more than ever for entertainment and distraction. Consumers downloaded more than 35 billion new apps and spent $35 billion in Q2 2020. The strong success is no surprise, but App Annie believes that even as lockdown restrictions are gradually lifted, the app habits formed are likely here to stay.

That means that game companies can be reasonably confident that the pandemic has shifted habits and the companies that are counting on this growth need not worry that mobile app and game usage will collapse in the unlikely event that people can go back to their normal lives soon. That’s still subject to change and debate, but for now App Annie believes it’s a good bet.

The mobile habit is strong 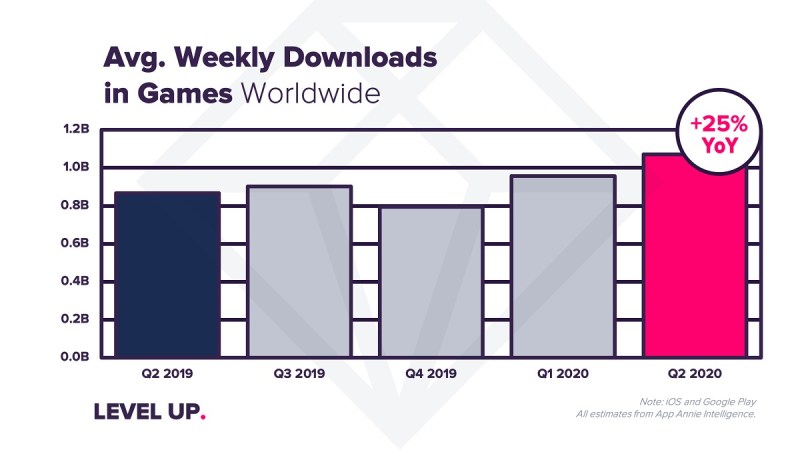 Monthly time spent in all mobile apps grew 45% year over year in Q2 2020, reaching a monthly all-time high of over 200 billion hours during the month of April 2020.

As some markets like China and South Korea begin to recover from COVID-19, markets like India, Brazil and Russia are continuing to work to control the outbreak. But app usage in all countries grew 15% (U.S.) to 35% (India).

On a category level, games, tools and entertainment were the largest by downloads on Google Play. On iOS, games, photo, video, and entertainment remained the largest categories by downloads for four straight quarters. The average user spends four hours and 20 minutes per day on smartphones, even though many of those users have access to PCs at home. 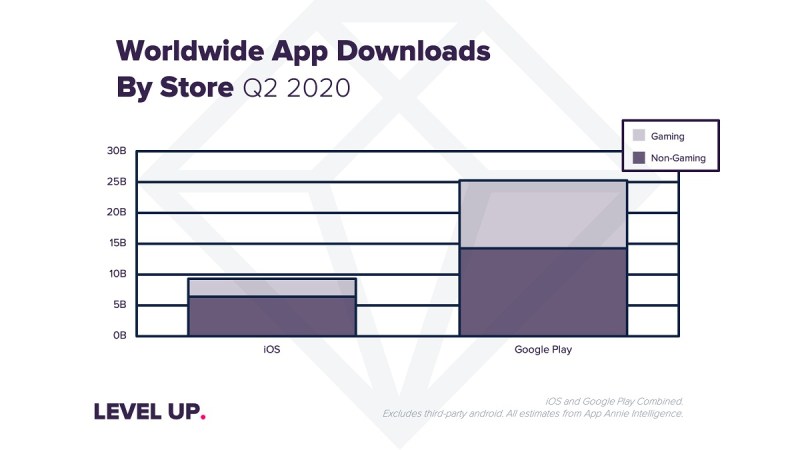 Above: Worldwide app downloads by store in Q2.

In the first week of Q2 2020, weekly mobile game downloads broke records at over 1.2 billion, and weekly download levels remained at 1 billion on average throughout the quarter, up 25% year over year. Overall downloads in the quarter were 14 billion across both iOS and Google Play. Quarantined consumers also set new quarterly records for consumer spend in mobile games, with $19.5 billion spent on purchases through the app stores in Q2 2020 — the largest quarter ever. Consumers spent 15% more in Q2 than in Q1 on mobile games.

By the end of 2020, mobile game spending is set to extend its lead over desktop and home console gaming to more than 2.8 times and 3.1 times, respectively.

Games accounted for a higher share of overall downloads on Google Play at 45% than on iOS at 30%.

On Google Play, India and Brazil were the largest markets by game downloads, while India and Indonesia had the largest growth of absolute downloads quarter over quarter. From a genre perspective, casual, action and board games drove the most quarter-over-quarter download growth as consumers sought games to help pass the time and connect them to family and friends during lockdowns. 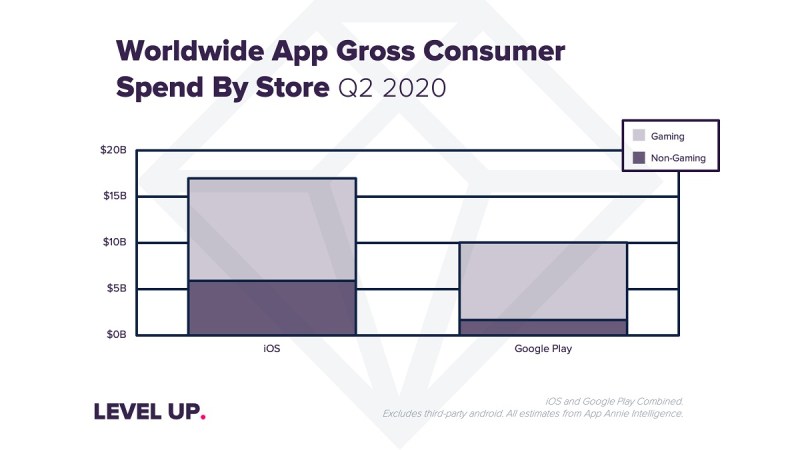 Above: Worldwide app gross consumer spending by store in Q2 2020.

The United States and China were the largest markets for iOS game downloads in Q2 2020, while Saudi Arabia and India were the two largest drivers of growth quarter over quarter. The arcade genre saw the most downloads on iOS, followed by the action and simulation genres.

Save the Girl, which first launched on iOS in January 2020, followed by Google Play in March 2020, shot up the charts to become the No. 1 most downloaded game worldwide in the second quarter. Based on the popular Talking Tom franchise, the My Talking Tom Friends virtual pet game debuted in June 2020 and reached the No. 7 position despite being released in the later half of the quarter.