(Reuters) — Nvidia has overtaken Intel for the first time as the most valuable U.S. chipmaker.

In a semiconductor industry milestone, Nvidia’s shares rose 2.3% in afternoon trading on Wednesday to a record $404, putting the graphic component maker’s market capitalization at $248 billion, just above the $246 billion value of Intel, once the world’s leading chipmaker. 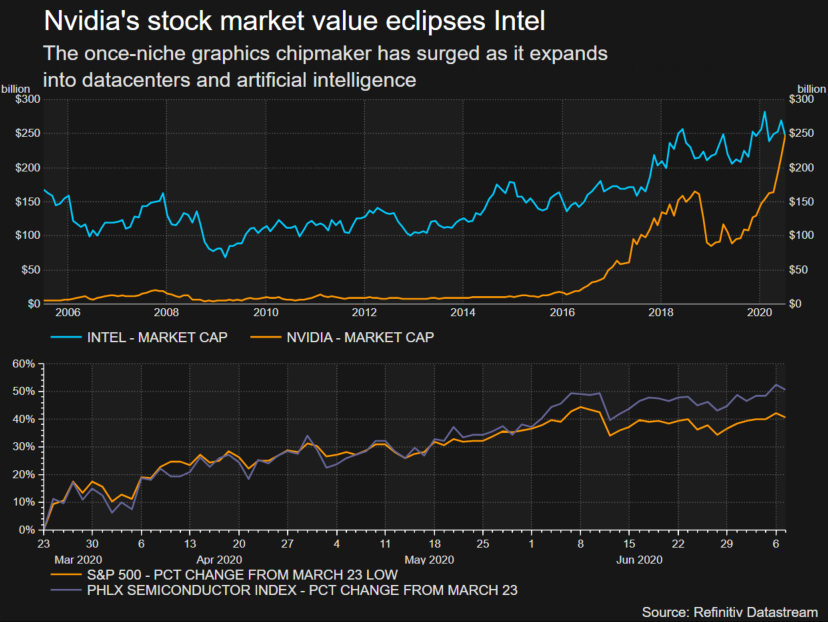 Above: Nvidia vs Intel stock

Nvidia’s stock has been among Wall Street’s strongest performers in recent years as it expanded from its core personal computer chip business into datacenters, automobiles and artificial intelligence. Intel, which for decades has dominated in processors for PCs and servers, has struggled to diversify its business after making critical stumbles in the smartphone revolution.

U.S. chipmakers have mostly outperformed since the S&P 500 hit a low on March 23, but Intel has enjoyed much less of that rebound than Nvidia, which is frequently among the most traded stocks on Fidelity and other retail investing websites.

While Intel’s stock has lost almost 3% in 2020, Nvidia’s has surged 68%. Investors have been betting that the shift to working remotely because of the coronavirus pandemic will continue to fuel fast growth in Nvidia’s datacenter business.

In recent years, Intel has also faced greater competition from foreign competitors, and its market capitalization has already fallen below those of South Korea’s Samsung Electronics (005930.KS) and Taiwan Semiconductor Manufacturing Co (2330.TW).

Most recently, Intel has suffered setbacks in its sprawling supply chain due to the pandemic, and higher costs related to the development of upcoming “Tiger Lake” 10-nanometer processors.

Despite Nvidia’s meteoric stock rise, its sales remain a fraction of Intel’s. Analysts on average see Nvidia’s revenue rising 34% in its current fiscal year to $14.6 billion, while analysts expect Intel’s 2020 revenue to increase 2.5% to $73.8 billion, according to Refinitiv.