The Last of Us Part II has some of the most memorable scenes you’ll ever see in a video game. Naughty Dog’s epic story feels like it goes on forever. I played it for 40 hours, and my daughter played it in 35. And we’ve boiled down some of the biggest moments to a little more than a half-hour in this video.

If you’re like me, you’ll want some help processing the story of The Last of Us Part II, which is both satisfying and frustrating, memorable and traumatic, violent and tender. To help understand the game, I interviewed Naughty Dog’s narrative lead, Halley Gross. We talked about all of the major scenes and what inspired them. My daughter Danielle Takahashi edited the video and added my commentary to it.

Our aim in talking about this so long after the game came out is to address the full story and help people process what they’ve already played. It’s a hard experience, and listening to someone talk about it and explain it can help with understanding and coming to peace with this enormous artistic effort. The game intersperses moments of brutality and raw violence with beautiful and empathetic scenes.

Warning: This story has spoilers about the game’s narrative. We recommend that you read this after playing –Ed. This is one of three stories we have scheduled on The Last of Us Part II.

We start the video with the beginning and ending of The Last of Us, which debuted in 2013 on the PlayStation 3 and sold more than 17 million copies. The Last of Us Part II debuted on June 19, and in its first three days it sold more than 4 million copies on the PlayStation 4. If you’ve played through, I recommend you watch the video. It may help you interpret some of the game’s key scenes, and why flashbacks play such a big role in understanding what is going through the minds of the characters. 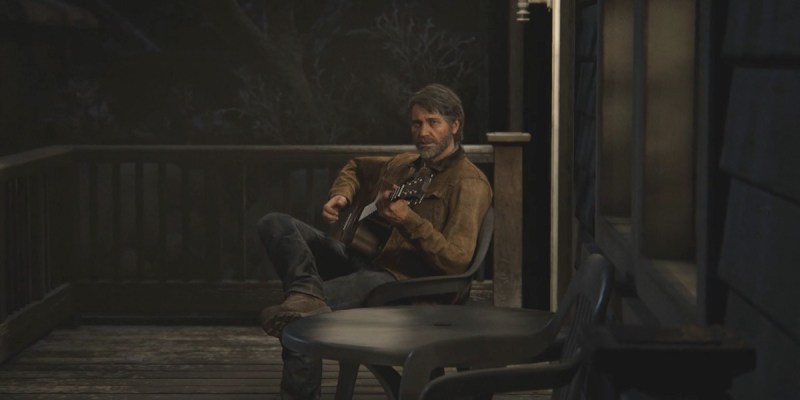 Above: Joel plays a guitar at the start of The Last of Us Part II.

Part II is theoretically about revenge and hatred, while the first one is about love, the rekindling of Joel’s humanity, and the bond he forms with Ellie. Part II takes place four years later, and we lose Joel early on. Abby, a new character who Gross says could have been best friends with Ellie in another life, kills Joel. I wasn’t at all happy about that, nor was I happy to play as Abby later on.

But Naughty Dog is relentless in executing this story as one consequence after another. A few moments are beautiful. But many scenes are ugly and hard to take. There’s irony in using a violent video game to make a commentary on how violence isn’t the answer, on how the cycle of revenge is too hopeless.

Still, the storytellers stick with the story they have chosen, taking the tale well beyond its logical endings, to the point where they can finally bring it full-circle and return it to themes of redemption, closure, and love. We learn the depths of despair, the notion of revenge as an addiction, and how it can cost you everything that matters in life. And while Abby and Ellie are foils, we can see how they pull back from revenge and find some kind of forgiveness.

I’d love to know in the comments for the video what you think. Did Naughty Dog pull it off for you? After you walked a mile in Abby’s shoes, did she become a more sympathetic character, or did you always side with Ellie, even when she drowns in hatred? This game is an epic story for the ages, and I hope you enjoy the video, even though it is hard to take.