Lenovo is launching a first for itself and for the workstation industry today: the ThinkStation P620 professional workstation with Advanced Micro Devices’ Ryzen Threadripper Pro 64-core processor. The processor has clock speeds up to 4.0 GHz, 128 lanes of PCIe 4.0 bandwidth, and eight-channel memory support.

Lenovo said the ThinkStation P560 is the only professional workstation powered by AMD’s new processor, which has more computing cores than those fielded by rival Intel. The machine has a single-socket central processing unit, and it is created for applications such as design, visualization, rendering, and artificial intelligence.

“This P620 platform has perfect timing,” Jenny Ramsay, worldwide product manager for workstations at Lenovo, said in a press briefing. “The industry is getting more complex. Projects are scaling higher. Departments are pushed to try to get new technology vetted without enterprise-grade features. You have to have a nimble and adaptable solution.”

In the past, the usual maximum core count that a single-CPU system could handle was 18 cores, while the highest a dual-processor system could support was 56. The result of 64 cores should be seamless 8K video streaming in real time, reduced render times, faster simulation solving, and other benefits that come with parallel performance. 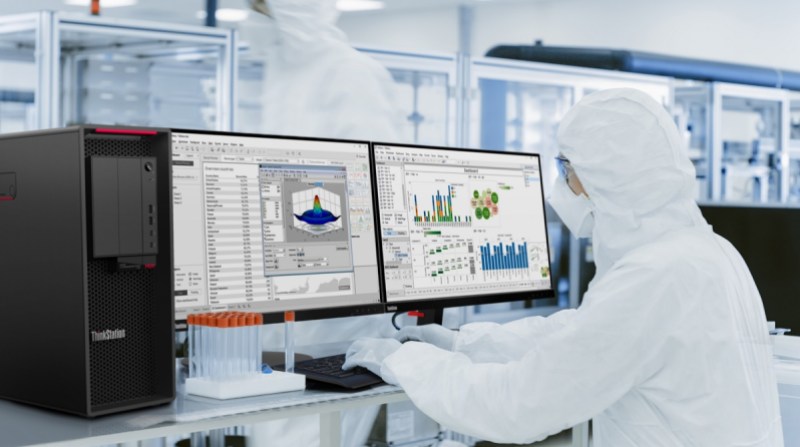 Above: Lenovo designed the ThinkStation P620 workstation to be flexible.

Lenovo designed the ThinkStation P620 for performance, but it also added flexible graphics processing unit (GPU) configurations, faster memory, quicker storage transfer speeds, and 10GB of built-in Ethernet — a new standard in connectivity. The message is that to make use of those 64 cores, you have to remove any bottlenecks from the rest of the system so it can keep up.

It includes support for up to two Nvidia Quadro RTX 8000 or four RTX 4000 graphics cards, up to 1TB of memory, and 20TB of storage. But there is potential for a lot of heat, and that’s a bad thing in a workstation. So Lenovo and AMD collaborated on an air-cooled solution with a custom-designed heat sink.

AMD Ryzen Threadripper Pro desktop processors include the AMD Secure Processor, which validates code before it is executed to help ensure data and application integrity, as well as AMD Memory Guard, which enables full memory encryption to help protect sensitive data against advanced physical attacks should a PC be lost or stolen. Lenovo has the support of partners such as Epic Games, which could use such workstations to create high-end game graphics.

The ThinkStation P620 will be available starting in September 2020. Ramsay said that benchmarks show that storage applications can run as 1.86 times faster than the competition, and it has up to 37% higher graphics performance compared to competing solutions. Against a system with two Intel Xeon Platinum 8280 processors, the AMD-based system won in 25 different benchmark tests.

Ramsay said the workstation is targeted for markets such as media, entertainment, finance, insurance, energy, oil and gas, AI, and software development. Jon Peddie, president of Jon Peddie Research, said in an email that the P620 has good design and solid reliability, and it will help Lenovo gain market share in the workstation business.