Uber is stretching deeper into the public transport realm today with the news that it has acquired Routematch, an Atlanta, Georgia-based company that provides technology services to transit agencies. Terms of the deal were not disclosed.

While Uber has displayed public transit data and enabled ticket purchases through its app for some years, the ride-hailing giant recently took a giant step toward bridging the private / public transport divide when it announced its first software-as-service (SaaS) partnership to bring on-demand public transport directly into the Uber app, starting with a bus agency based in Marin County, California.

By bringing Routematch under its wing, Uber is building on its long-stated mission to make “individual car ownership a thing of the past,” adding that it would enable it to support cities in “providing more accessible public transportation.”

This deal also follows hot on the heels of a string of recent acquisitions that has seen Uber continue its expansion far beyond its “bread and butter” ride-hail service. Indeed, Uber is currently wrapping up its Cornershop acquisition to expedite its ambitions in grocery deliveries, while its impending $2.7 billion Postmates acquisition continues on that “delivery anything” trajectory.

Founded in 2000, Routematch provides a suite of software services covering both fixed-schedule and demand-based transport, such as door-to-door “paratransit” services for the elderly that don’t follow fixed routes or timetables.

By integrating with Routematch, transit agencies can garner real-time data on the location and status of every vehicle in a fleet, issue messaging to staff through emails and push notifications, view trend reports, use push-to-talk technology to communicate with drivers, broadcast information to riders, and even manage payments.

Through Routematch’s RouteShout mobile app, for example, transit agencies can integrate their data to offer local riders real-time and scheduled bus arrival times through their phones. 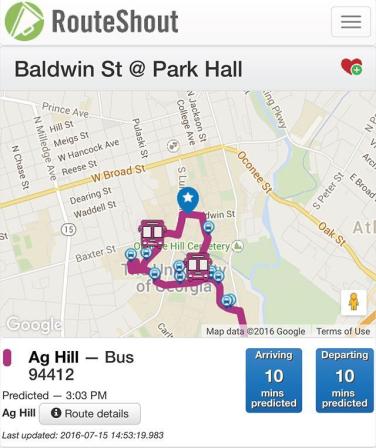 In its 20-year history, Routematch has amassed around 500 transit agency partners globally, a significant portion of which are in the U.S. For Uber, this gives it an easier inroad to create an all-encompassing app that combines all possible transport options, while opening the door to new types of services including on-demand public transport that can be tailored to match what local residents actually need — this could mean a departure from traditional “fixed-route” bus services that travel half-empty for much of the time.

In truth, this acquisition opens the door to two-way integrations, which could see both Uber and the transit agency apps super-charged with an array of new transport services spanning cars, scooters, bikes, buses, and trains.