WordPress.com’s parent company Automattic is launching a new team communication and collaboration product today, one that has served as the “foundation of Automattic’s distributed work model” for more than a decade.

Long before home-working became the “new norm” for a pandemic-ravaged global workforce, Automattic was a fully signed up member of the telecommuting fanclub.  Since its inception in 2005, Automattic has gone all-in on remote-working, and today give more than 1,200 employees in 77 countries full autonomy to work from wherever they please. But this level of distribution requires the right tools and technologies to ensure workers can collaborate across borders and time zones, which is why Automattic has relied on myriad third-party products such as Slack and Zoom.

However, the company has increasingly used its decade-plus distributed workforce experience to develop its own tools, including a productivity suite called Happy Tools that it now sells to businesses for $5 per month. Long before this, however, Automattic created a platform called P2, which it has used internally for more than a decade as a blog-style conversation conduit designed for asynchronous communications.

It’s worth noting that P2 has also been available as a theme since 2008 for anyone to integrate into their blogs, though it hasn’t been updated in more than four years. 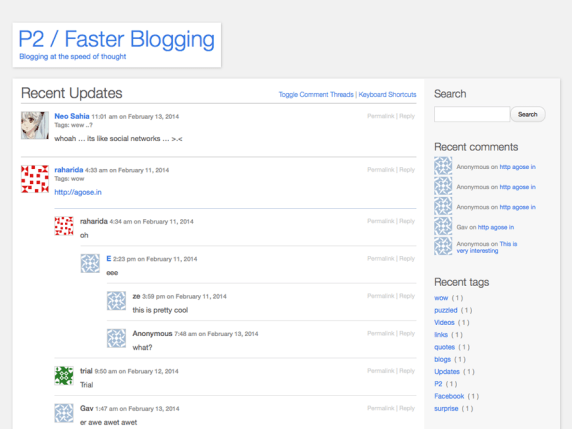 Today sees P2 arrive on the scene as a fully standalone product, designed for teams of all sizes.

Powered by WordPress.com, P2 is available on the web and through the WordPress mobile app on Android and iOS. It’s flexible in terms of use-cases, but it’s perhaps a little akin to a company intranet or Reddit-style forum, insofar as it attempts to “move teams and organizations away from siloed email inboxes,” according to Automattic.

Anyone can create a threaded discussion around just about anything — the latest company products, new projects on the horizon, team away days or nights out, and everything in between. P2s can be set up for private internal team discussions, or open conversations with customers and partners. Users can easily switch between P2s from within their WordPress.com account — each P2 has its own unique URL, similar to any standard WordPress.com blog. 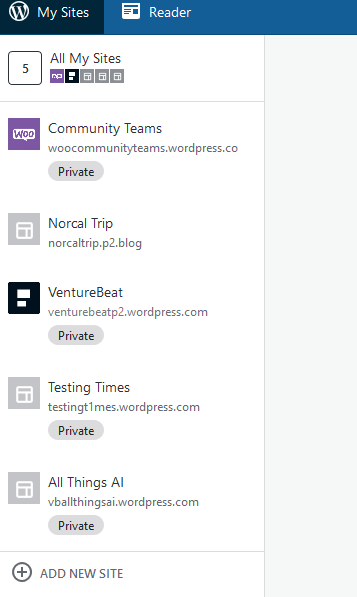 The launch was largely driven by the sudden global shift to remote work, according to Automattic, which said that it has seen “an influx of interest in its distributed work best practices” in the past few months.

There are no shortage of team collaboration tools out there, of course, with the likes of Slack and Microsoft Teams already used by millions around the world. But P2 is built firmly with the distributed workforce in mind, and focuses on asynchronous communication that enables teams to work together across time zones.

That said, P2 could also be used for real-time communications, as it supports messaging and @mentions similar to Slack, while users can receive alerts and notifications if someone tags them in a post. 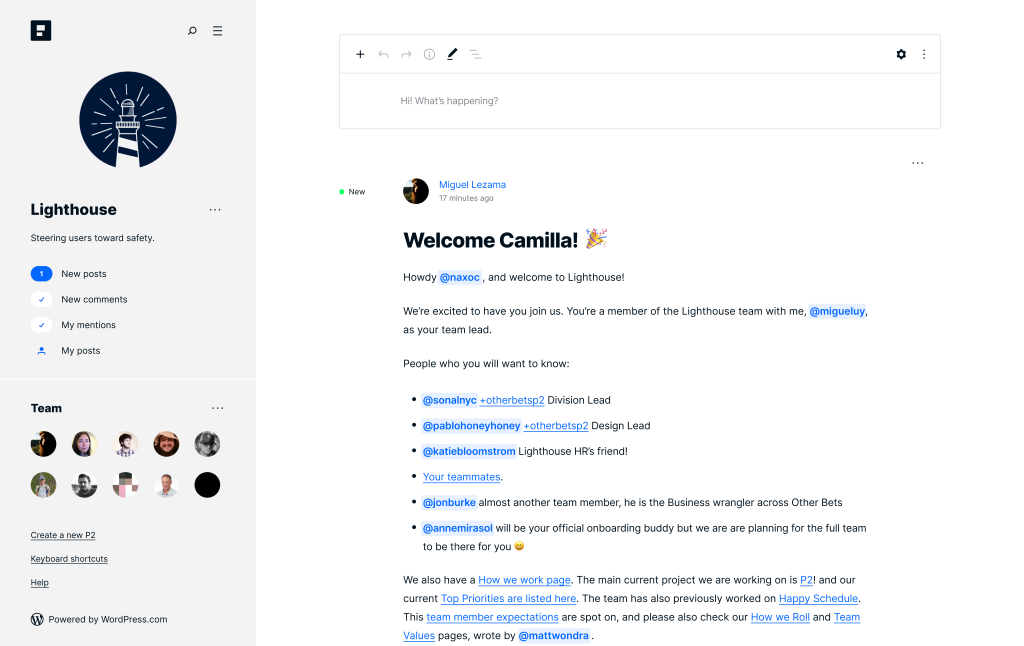 On the other side, Slack too can be used for asynchronous communications. So what are the core use-cases for P2, exactly?

In essence, P2 is designed as a companion platform to real-time communication tools, such as Slack. It’s designed to house the longer-form discussions that are not as time-sensitive, leaving the other real-time platforms for the day-to-day office-type chatter.

“Slack tends to be noisy with lots of watercooler conversations mixed in with weighty topics,” explained Jon Burke, who led the P2 product launch for Automattic. “As a result it can be tough to find something you need using search or scroll back. P2 is where we show our work, and often is where routines happen and decisions are made. For example, every team posts regular Thursday updates and important HR policy updates, product release documentation and others key updates are shared in P2. An important HR update could easily be overlooked in Slack.”

Moreover, P2 is an open platform that is built on WordPress, meaning that content can be easily exported for use anywhere else.

Perhaps most importantly here, P2 is built on WordPress, meaning that its look-and-feel is very different to that of most enterprise-focused collaboration tools — it’s more visually appealing, like a blog. This also means that P2 isn’t necessarily aimed at companies, it can be used by any “team” out there, including sports clubs, schools, or families to organize holidays or weddings.

P2 is available now in open beta for anyone to use, and the plan is to keep the platform free for everyone — however, it will be adding premium features to the mix in the future. The existing P2 theme will also still be supported for those who use it.