Android devices will soon be able to detect earthquakes as they’re happening, thanks to a partnership between Google, the U.S. Geological Survey’s (USGS) ShakeAlert, and academics at the University of California, Berkeley and California Institute of Technology (Caltech). It’s one of several features heading to Google’s mobile OS today and in the coming weeks, along with updates to Android for cars and a Bedtime mode that reminds users when it’s time to sleep.

An estimated 3 billion people live with the threat of earthquakes globally. According to the USGS, in California there’s a 94% chance that an earthquake will not be just a foreshock. Yet only a few countries — like Mexico, Japan, Turkey, Romania, China, Italy, the U.S., and Taiwan — have an earthquake early warning system (EEW), in part because they can cost upwards of $1 billion.

Google says it collaborated with the USGS and the California Governor’s Office of Emergency Services to send earthquake alerts powered by ShakeAlert to devices running Android 5.0 or newer. ShakeAlert draws on signals from over 700 seismometers across California through USGS; Cal OES; the University of California, Berkeley; Caltech; the California Department of Water Resources; and over 60 other partners. This allows the system to identify earthquakes and calculate their likely intensity by detecting the first energy radiating from the epicenter. Studies in Washington, Oregon, and California show the warning times range from seconds to tens of seconds.

The USGS began testing ShakeAlert notifications in California last October through the FCC’s Wireless Emergency Alert system (WEA) and smartphone apps, with a plan to expand it to Oregon and Washington. For now, Google is committing to bringing alerts to more states and countries through what it’s calling the Android Earthquake Alerts System. Google says it developed this new service, which detects the first wave (the P-wave) of an earthquake using accelerometers in devices like smartphones, by working with researchers including Richard Allen, director of the Berkeley Seismological Laboratory at the University of California, Berkeley; Google scholar Qingkai Kong; and Lucy Jones, a research associate at the Seismological Laboratory at Caltech.

If a device contributing to the Android Earthquake Alerts System detects something that might be an earthquake, it sends a signal to a central detection server, along with a coarse location of where the shaking started, according to Google. The server then combines information from multiple phones to determine whether an earthquake is occurring. Google says it will use the technology to share a view of impacted areas on Google Search and will include relevant results for local areas, along with resources on what to do. Users will see the information when they look up “earthquake” or “earthquake near me.”

When a user dials an emergency number wherever ELS is available, devices running Android 4.1 or newer with Google Play Services installed will soon be able to share their default language setting. Google says this will allow emergency operators to find the appropriate translator more quickly.

In June, Google unveiled Bedtime mode, formerly known as Wind Down in Digital Wellbeing, which previously lived in a dedicated settings menu and a tile within the Quick Settings panel. Bedtime mode is now built into the clock app for Android 6.0 and newer so users with Digital Wellbeing-compatible devices like the Pixel 4 and 4 XL will see it both in the menus and the app. 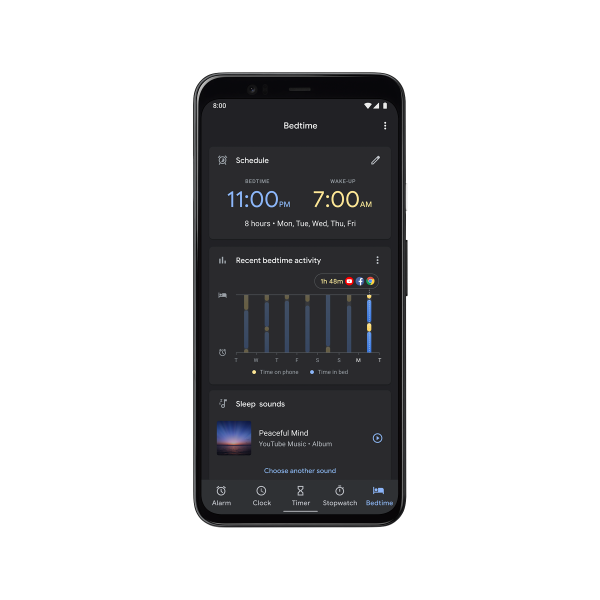 As before, Bedtime mode flips on Do Not Disturb to silence calls, texts, and notifications. Grayscale fades the colors on phones to black and white while optionally playing sounds from Calm, Spotify, YouTube Music, and more.

Google also revealed new capabilities bound for Android Automotive OS and Android Auto, which the company says is on track to be in over 100 million cars within months. One toolset seeks to expand Android Auto’s library from the roughly 3,000 apps available in the Play Store to hundreds more tailored for driving.

Google says it worked with early adopter partners like SpotHero, TomTom, MapFactor, Chargepoint, and Sygic to build Android Auto apps in new categories spanning navigation, parking, and electric vehicle charging using the new Android for Cars App Library. The library is designed to ensure in-app tasks can be completed with minimal glances and taps, and Google says it collaborated with government, industry, and academic institutions to develop best practice guidelines and templates for mitigating distraction.

The apps will be released to beta testers by the end of this year, Google says. Pending additional testing and feedback, the company plans to make the Android for Cars App Library and APIs available to third-party Android Auto app developers. 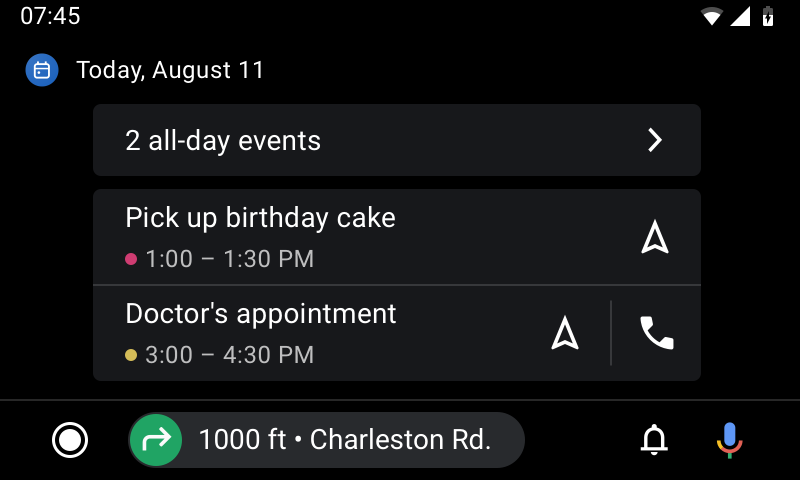 On the operating system level, Google says General Motors, BMW, Kia, and other car manufacturers have added support for wireless connections to Android Auto. New settings and calendar apps provide access to preferences and views of daily schedules on car displays. From the calendar app, tapping on events with locations or phone numbers will pull up turn-by-turn directions in the Maps app or the dialer accordingly.