Naughty Dog has issued an update for The Last of Us Part II that enables new game modes such as Permadeath and Grounded mode.

Both of these modes make The Last of Us Part II very hard to play, and that will make some players very happy. Not me. I’ll have to move on to something else, as I have done recently. And you all know why.

For those who don’t mind the torture, the Permadeath mode will give you one, and only one, life. That means you have to play this 35-hour game so expertly that you don’t die. If you do, you have to start over. It’s a lot like Dark Souls and other roguelikes. But knowing how difficult this game is — particularly in fighting beasts such as the Rat King — this will be pretty hard. 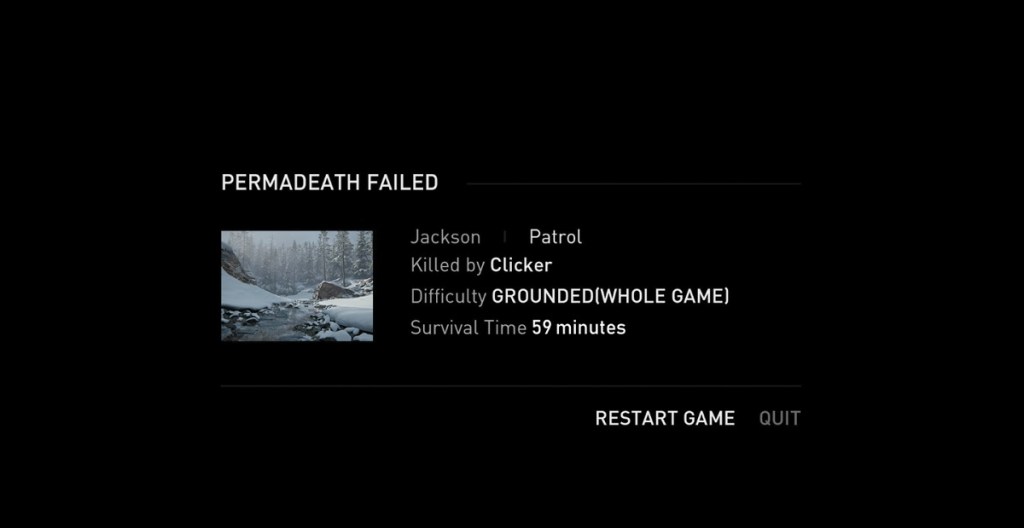 Above: Permadeath means you can die only once in the new mode for The Last of Us Part II.

And Grounded mode is not a piece of cake. It triples the damage an enemy does to you. It removes the Listen Mode that enables you to track the whereabouts of nearby enemies. It removes the heads-up-display, and it makes the already-scarce supplies even more scarce in the post-apocalyptic world.

Both modes might be better known as torture modes. Sony announced the details this morning, but some smart folks spotted the update yesterday as Sony updated the trophies you can earn from the game.

In Permadeath, the game will measure how long you survive before dying. You can try beast your goal all day long while the rest of us are playing Ghost of Tsushima or Total War Saga: Troy.

There’s no mention so far of a hoped-for multiplayer mode in The Last of Us Part II. The game will also feature new graphics and modes such as slow motion, bullet speed mode, different kinds of audio, and some accessibility improvements.