WattBuy has come up with a way to calculate the electricity cost and carbon footprint for almost any home in the U.S. The Seattle company specializes in energy intelligence and has created a database where consumers can enter their address. It then uses machine learning to give them an instant estimate of their energy costs and carbon footprint.

I tried it out and found that my home’s carbon footprint is 2,618 pounds, compared with the national average of 1,712. That doesn’t reflect my exact energy bill, but it’s based on the average amount collected by my power company — PG&E — in California, as well as the dimensions of my home. I use an estimated 818 kilowatt-hours of electricity a year.

If I wanted to get my exact estimate, I could log into the PG&E site and retrieve my “green button” data, which downloads the actual energy usage and billing info for my home. I could then upload that to WattBuy and get a more customized carbon footprint estimate, which is a proxy for the environmental impact of my home. (WattBuy finds that electricity costs vary about 20% from generic estimates.)

I put off doing this because the site didn’t accept my XML file. But I can look at a chart that shows the month-by-month estimate of annual carbon dioxide (CO₂) emissions created by my home’s electricity usage.

It also incorporates building characteristics from Zillow, as well as individual county assessment data to determine specific housing characteristics. WattBuy provides this address-level information for nearly every home, many townhomes and condominiums, and some multifamily apartment buildings, WattBuy CTO and cofounder Ben Hood said in an interview with VentureBeat.

“We are focused on a simple but ambitious vision, which is we want to get every household access to cheaper electricity,” CEO and cofounder Naman Trivedi told VentureBeat. “We’ve been working in states across the U.S. where residents have the power to choose who provides the electricity. So these are deregulated states across the U.S. In a place like Texas, you can actually choose among 109 different providers for your electricity. And each provider might have 10 to 15 different plants.”

To come up with its calculations, WattBuy incorporates several open and proprietary data sources, including recent hourly temperature and weather data from Dark Sky, climate data for historical trends from a typical meteorological year (based on the U.S. Department of Energy Open Energy Data catalog), and several other proprietary data sets, said Hood. 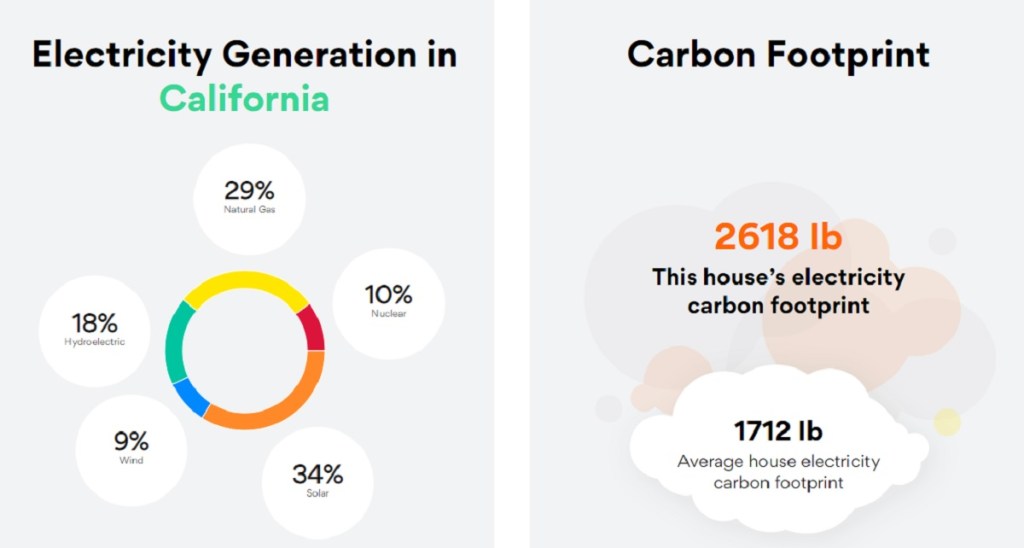 Above: My own WattBuy carbon footprint estimate.

This data is then used to build a gradient boosting machine learning model that takes location, building characteristics, and weather data as inputs and returns an hourly electricity usage prediction. In California, I can only do so much with this data — PG&E provides a few rate plans and WattBuy might eventually be able to recommend a rate plan.

But in places like Texas, consumers can use WattBuy data to go shopping for an energy distributor, Trivedi said. If you sign up to buy electricity from a WattBuy connection, it gets a commission. That’s how the company makes money, said Trivedi. About a dozen states in the U.S. offer deregulated electricity.

“Our core business is to be able to recommend a plan for a home, given its exact usage profile,” Trivedi said. “So we work directly with companies on retail to suit providers to grab their data and plans and then list them on our site. And then we’ll actually recommend a plan directly for a home.”

In the meantime, consumers can get cheaper or greener electricity options and then measure the results on a monthly basis. WattBuy is also making a scalable version of this data available to enterprise customers via an application programming interface (API). Consumers can also decide whether they should install solar to get rid of their electric bills.

“When we started this business, there was no public data source that allowed us to be able to see what somebody’s electricity cost would be across the U.S. and then also be able to pull in some information on going into their electricity,” Trivedi said. “We find the fuel sources that are driving the electricity so that they can understand their carbon footprint.”

WattBuy was founded in 2017. It has eight employees and has raised $1.7 million to date.

“We were noticing that there was misinformation and scamming, where the lack of information would push people to make a decision that doesn’t make sense for them,” Trivedi said. “There was no way to see what someone’s electricity costs would be on average across the U.S. We wanted to provide that in an easy-to-consume format.”