Activision‘s Treyarch and Raven Software studios showed off the gameplay for their long-awaited Call of Duty: Black Ops — Cold War, a sequel to 2010’s Call of Duty: Black Ops. In this game, you play as CIA operative Russell Adler hunting after a Soviet spy who has eluded capture for decades. You’re authorized to go after the spy, whose code name is Perseus, in a deniable covert operation authorized by the president of the United States.

Cold War will be a cross-generation game, meaning you’ll be able to play it on the PC (on Battle.net), PlayStation 5, Xbox Series X, PS4, and Xbox One. Players on these will be able to play with each other and switch between the platforms without losing their progression. You’ll be able to be in a party with players from other platforms — or play against them. On the new consoles, you’ll enjoy features such as 4K HDR graphics, no loading times, and faster gameplay.

I got a close look at the gameplay. Activision showed glimpses of a few levels from different parts of Cold War that appear like typical Call of Duty gunplay. When the player fired at the enemy, the gun shook but didn’t fall away from its target. The player dispatched the exact number of bullets that it took to penetrate the enemy’s armor and take them down before moving on quickly to the next target. You can tell a Call of Duty game with a single look, and this one was no different.

This demo, though, had variety of options that you could pursue in stealth. You could steal something, poison someone, bribe an enemy, or blackmail them. While I didn’t see the gameplay in person, what I saw looked pretty good and quite ambitious.

This is one of four stories about the Call of Duty: Black Ops — Cold War reveal. See our coverage of the main announcement, a developer Q&A, and the Warzone/Zombies post. 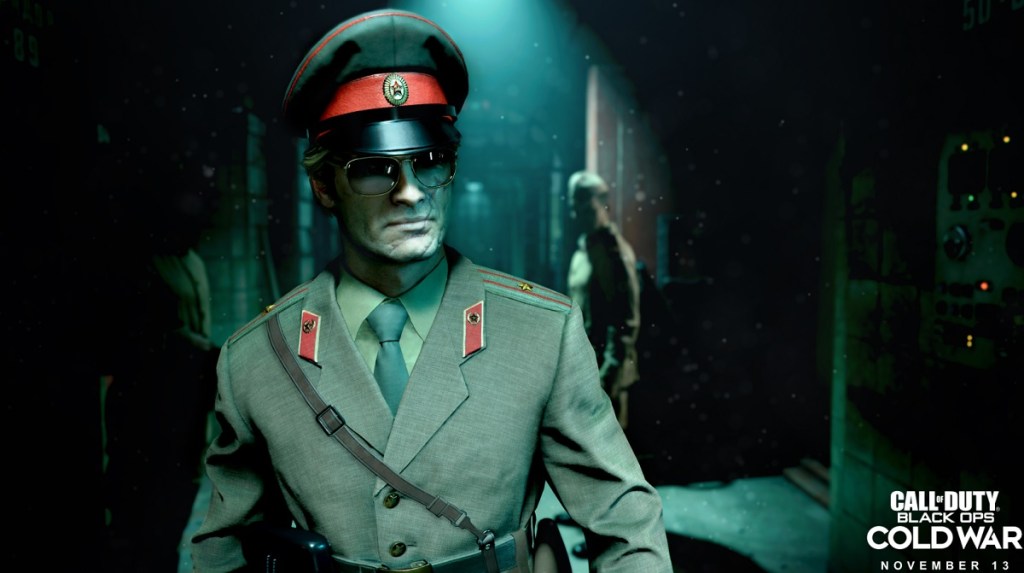 As Adler or in some cases operative Frank Woods, you’ll have to infiltrate Soviet installations and find out secrets. You may stay in stealth and see what it’s like to be in a place where there are nothing but enemies. But some point, you’ll have to shoot your way out.

In another level, you play as a double agent inside the infamous Lubyanka installation, the headquarters of the KGB in Moscow. Again, the first half of the mission is cloak-and-dagger, while the second half is pure Call of Duty action. In this building, when you call up the map, you can see not only your own location on the floor plan but also the room where you have to go and the different ways to get there. The marble floors reflect light, as do the glass frames on the walls, making an ordinary scene stand out with eye-popping graphics.

Once you go weapons-hot inside the secret police location, you burst through some doors and fire at everyone who moves, toss grenades, and dodge incoming fire. You blast away while Pat Benatar sings, “Hit me with your best shot.” You just keep firing at targets until the cross-hairs turn red and you’ve taken them down.

The color scheme of the Soviet locations is a dismal gray, while you see lots of greenery in Vietnam and even wild colors in the drug-induced parts Black Ops: Cold War. There’s still another scene where the Soviets train to invade America. Inside this building, you see a bunch of cardboard cutouts of Americans, and the Soviet soldiers come into an arcade full of colors. The operatives joke that they’ll give the Russian trainees some real-world experience. And then a shootout erupts inside the colorful training facility.

You also see some combat in a familiar Burger Town, as that’s a well-known fast-food brand from past Call of Duty games. 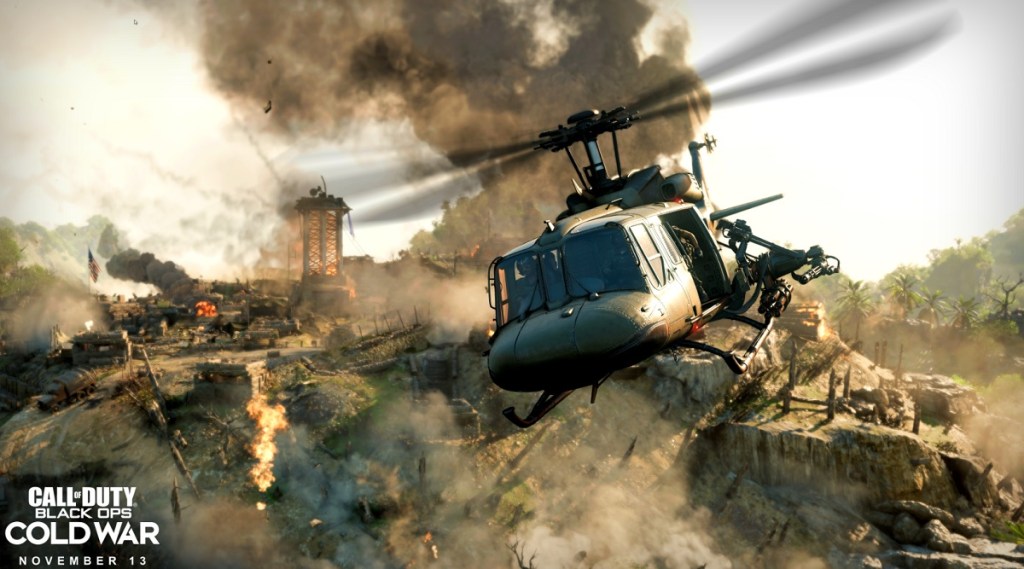 Above: Call in the choppers.

While the game starts in 1981, Cold War also takes the player back to the memories of a mission in Vietnam in 1968, when the CIA came the closest it ever had to catching Perseus, the master spy. Perseus had tried to steal an American-made nuclear bomb from a firebase. As Adler, a soldier-turned-CIA operative, you have to remember something critical about the Vietnam mission in order to bring back an important memory that could be key to catching Perseus. Treyarch and Raven showed us one mission, but apparently others also take place in Vietnam.

The Vietnam War, of course, was fought in the era of psychedelic drugs. And in this level, these big red doors appear in the middle of the landscape as you’re running away from enemies. This also reminds me of the drug-induced gameplay from the Far Cry series. There’s more than one level that connects back to the memories of Vietnam. The red door beckons to you, and if you run around it, it will appear in front of you later on. It’s as wild a scene as you’ll see in any game, and it underscores the sense of paranoia in the story. A voice tells Adler to go into the door, and it reminds him that he’s the only one ID Perseus. Treyarch promises this is “one of the most unique levels we’ve ever created.”

What’s cool about this level is that you have multiple choices for stealth or combat. Critical pieces of the narrative will unfold through the player’s choices. In fact, you’ll be able to replay this mission with a different outcome to see if it yields a different result.