AI data management and annotation startup Dataloop today announced it has raised $16 million in funding through an $11 million series A round and a previously undisclosed $5 million seed round. A spokesperson says the funds will enable Dataloop to increase its recruitment efforts and grow its presence in the U.S. and Europe.

Training AI and machine learning algorithms requires plenty of annotated data. But data rarely comes with annotations. The bulk of the work often falls to human labelers, whose efforts tend to be expensive, imperfect, and slow. Dataloop claims to solve the annotation challenge with a platform for automating data prep and data operations. It specializes in high volumes, high variance, and complex data, helping a range of companies create AI development and production pipelines.

According to cofounder and CEO Eran Schlomo, the pandemic has accelerated digitalization within enterprises and increased demand for automation and AI applications. Dataloop has seen a surge of interest in its platform from health and medical sectors. The autonomous vehicle space has slowed with the onset of the pandemic, Schlomo says, but there are “promising signs” that development has resumed.

Above: Video scene classification in Dataloop.

Dataloop offers human-operated tools and plugins from item classification to pixel-level segmentation for images, videos, and more. The platform’s trackers and models — which handle things like video interpolation, scene classification, smart object tracking, object identification, and occlusion — run automatic annotations on items before they reach human annotators, who only have to fix or validate labeled data instead of working from scratch. 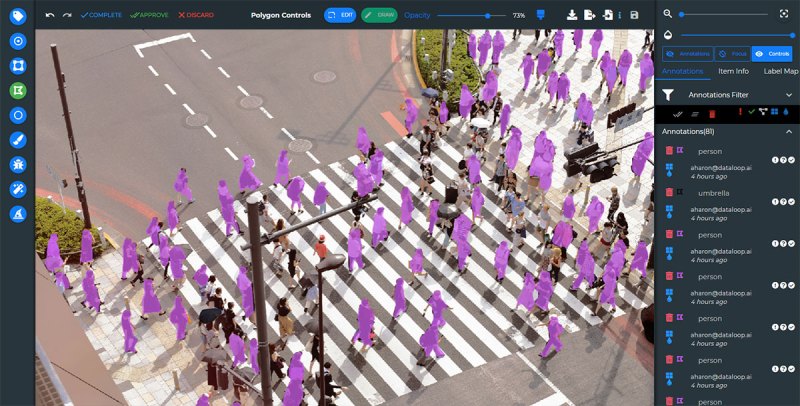 Dataloop’s data operations toolkit is as at least as extensive as its annotation tools. Customers can use it to search, edit, and query data by item info, metadata, annotation status, and more. They can also sort and filter datasets before distributing items for annotation and quality assurance, combining input from multiple sensors to receive data outputs like images, videos, and lidar point clouds. And they can opt to use Dataloop’s Python software development kit to build custom data pipelines for model training, active learning, and model integration.

Dataloop is in a category adjacent to companies like Scale AI, which has raised over $100 million for its suite of data labeling services, and CloudFactory, which says it offers labelers growth opportunities and “metric-driven” bonuses. That’s not to mention Hive, which netted $10.6 million in November 2019; Alegion, which nabbed $12 million in August 2019; Appen; SuperAnnotate; and Cognizant.

But Shlomo says Dataloop has 5,000 users on its platform, including Fortune 100 companies. One unnamed pharmaceutical client is reportedly using Dataloop to detect and track cancer cells in microscopic images and video frames. A client in the defense industry is leveraging the platform to build an autonoumous on- and off-road vehicle that will be used for guarding and patrol in areas where it is unsafe for soldiers to be posted.

“The closing of this round will allow Dataloop to bring its next-generation cognitive cloud capabilities to the forefront, a cloud in which mixed human-machine intelligences are weaved seamlessly together to create the next generation of smart applications,” Shlomo said. “With this opportunity, we hope to continually improve data labeling, making it increasingly rewarding both financially and professionally for those in the profession.”