Zoom has become an indispensable tool for businesses, schools, and even health care providers during the pandemic. Now the company is extending its utility with the launch of new app integrations it calls Zapps.

While Zoom’s existing app marketplace allows developers to bring its functionality into their own apps, the new Zapps marketplace brings third-party app functionality into Zoom. The company plans to launch with some 35 Zapps partners later this year, including Atlassian, Dropbox, HubSpot, Salesforce, and Slack. Zoom also expects education partners like Coursera and Kahoot to enhance virtual learning, which could be particularly timely as lockdowns stretch on indefinitely.

Zoom claims Zapps will enable companies to drive more growth and revenue and anticipates opening the platform to all developers after this year. As of April 2020, Zoom has about 200 million daily meeting participants.

Chorus.ai has had native integration with Zoom since 2019 and is now one of Zoom’s official Zapps launch partners. Chorus.ai brings conversational intelligence to meetings, allowing sales teams to review existing customer emails in the Zoom client, transcribe meetings in real time, and analyze recorded calls. Chorus.ai also keeps track of who talks and when, with features designed to improve engagement and teamwork. If a team member is less active, for example, someone can tag them and encourage them to speak up. 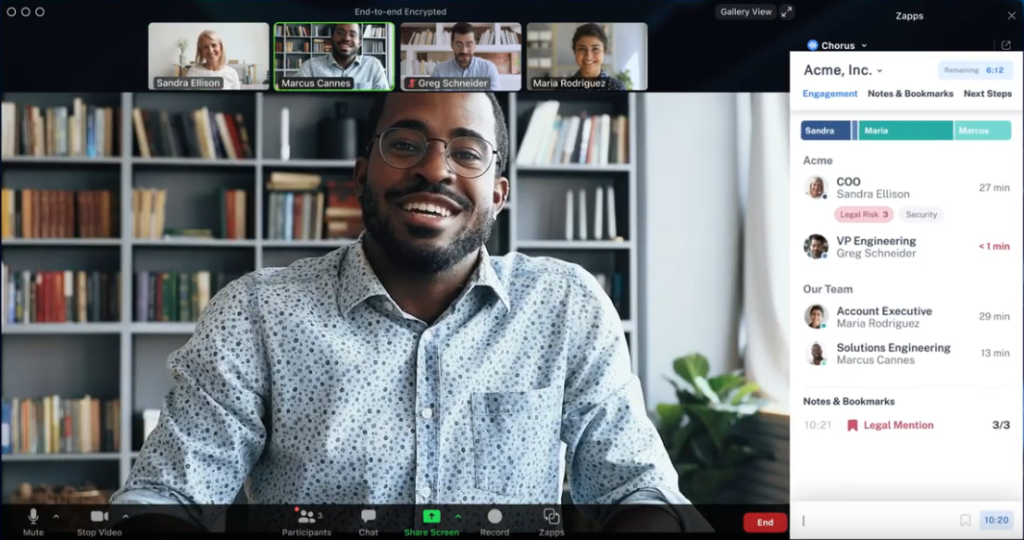 Above: Chorus.ai “Zapp” integrated into Zoom

Chorus.ai CEO Jim Benton compares the launch of Zapps to Apple’s App Store launch. “[Apple] opened up their API so that others could build apps. We went a year and a half with iPhones that just had the baseline apps that Apple had — you know, calculator, messaging, music, photos. And it was remarkable. We were blown away by what we could do,” Benton said in an interview with VentureBeat. “And then they opened it up, and we saw companies like Box reinvent themselves. We saw companies like Pandora suddenly thrive, where they had a beautiful player. And we saw companies like Sonos no longer have to build the hardware they had. I think that this is a very powerful moment.”

Zoom product lead Ross Mayfield told reporters in a briefing that Zapps could present “a new model of collaborative app distribution, adoption, and engagement.” Mayfield said he expects to see a “rise of Zoom startups and apps for collaborative social experiences we’ve just begun to imagine.”

For Zoom, the Zapps launch represents a major move against chief competitors Microsoft Teams and Google Meet. By the end of this year, the first round of Zapps will be available for all Zoom users, whether they’re on free or paid plans.