Google is introducing new controls designed to make it easier to control what data it uses to personalize various “smart” features across its suite of products. This means that Gmail users will soon be able to access a setting that stipulates whether their Gmail, Chat, or Meet data can be leveraged for Google’s automated Smart Reply or Smart Compose, for example, or whether bill payment reminders gleaned from email data can be issued through Google Assistant.

The launch comes as internet giants such as Google face increasing scrutiny over their data privacy practices, and new regulations designed to protect consumers’ online privacy have come into force.

Google has introduced myriad “smart” features that apply AI and machine learning techniques to its users’ data to enhance the utility of its services. For example, Gmail users will likely be familiar with Smart Compose, which is basically auto-complete for emails — it can use historical grammar and typing habits to make word and sentence suggestions in real time.

In a world wary of big tech’s manipulation of user data for nefarious deeds, Google has offered some semblance of data privacy controls through the years, including dedicated security dashboards and privacy checkup tools that allow users to manage and deactivate features such as location history, web and app activity, and YouTube viewing history. Earlier this year, Google also activated a new auto-delete feature by default for some users.

In Gmail specifically, users can already delve into their account settings and stipulate not only whether Smart Compose is activated or not, but whether it’s personalized to the user’s specific writing style.

But in truth, even if the user knows that these features exist, it’s all too easy to lose track of what settings are on and off.

Rolling out “in the coming weeks,” Google’s new setting aims to add centralized controls to the mix, specific to how it uses Gmail data to power its various smart features. This means that those who visit their account settings will now see an all-encompassing option that asks whether they want to activate or deactivate smart features in Gmail, Chat, or Meet. 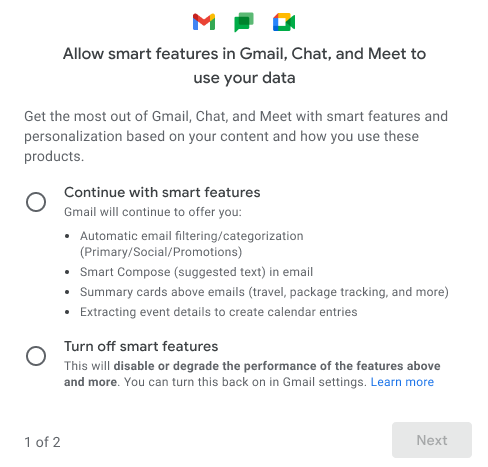 The second screen then asks the user whether they also want to allow their Gmail, Chat, and Meet data to be used to personalize other Google services such as Google Assistant, Google Maps, and Google Travel.

Aside from features such as bill reminders in Google Assistant, this will also impact things like whether Google can create automated travel itineraries from trip bookings it detects in users’ Gmail messages. 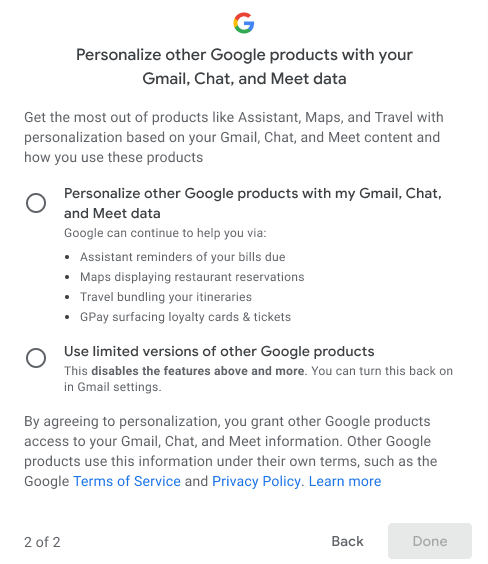 Numerous data privacy laws have come into affect around the world in the past few years, including GDPR in Europe and the CCPA in California, meaning that companies such as Google have had to change how they operate, or face the wrath of legislators. Indeed, Google is currently facing complaints on numerous fronts, including an accusation by browser rival Brave that Google is breaching European data protection law in the way it shares data between its services without proper consent.

Closer to home, Google is facing a $5 billion class action lawsuit in California that alleges the internet giant essentially ignores users’ privacy wishes. And in the U.K., Google is facing another lawsuit over how YouTube uses kids’ data to target advertising.

Put simply, Google is fighting a lot of fires on many fronts.

Google said that its new setting is less about bringing new privacy functionality to the mix than it is about giving users a “clearer choice over the data processing” that makes its smart features possible. The company added that it was designed based on learnings from “user experience research and regulators’ emphasis on comprehensible, actionable user choices over data.”