Jam City president Josh Yguado believes that games have become the center of the entertainment universe. His Los Angeles company would know, as it sits at the intersection of mobile games and Hollywood.

Mobile games are expected to generate $100 billion in revenues in 2020, according to mobile data and analytics firm App Annie. But Hollywood film, music, and other entertainment production has come to a standstill in the pandemic. Games, however, can still be made, and they’re being played more than ever.

Yguado spoke about the business at our GamesBeat Summit 2020 event in a fireside chat with Amy Allison, head of community of Skydance Interactive and chief of programs at Women in Games International.

He noted how gaming was still a much smaller industry a decade ago when he and Chris DeWolfe started Jam City.

“Gaming used to be inconvenient, and not enough people played games,” Yguado said. “Mobile changed everything. It was because of accessibility. Everyone had a console in their pocket. The session lengths were great, designed for 5-minute sessions. And there was incredible competition, with thousands launched every day. We wanted to be at the forefront of where media was going, and it felt like mobile games were coming very quickly.”

Above: Amy Allison of Skydance Interactive and Josh Yguado of Jam City.

Jam City’s games have a lot of variety. It doesn’t take a single type of game and reskin it for a bunch of genres, Allison said. In mobile’s early days, Hollywood companies seemed to think of mobile games as a marketing channel, rather than a key source of revenue.

Yguado said that so many people who play mobile games don’t think of themselves as gamers.

“The idea of what a gamer is is definitely evolving,” he said. “In the past, they used to be young male oriented. At Jam City, we have more female gamers. That’s uncommon. This democratization of games has really changed the space for the better. It’s not taking the place of console games. But as it relates to Hollywood, everyone is playing games now, and gaming is one of the best channels for fans to interact with their favorite characters and worlds.” 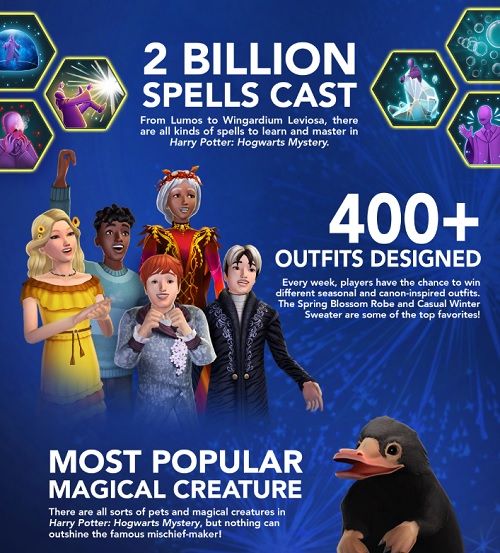 Above: Harry Potter: Hogwarts Mystery has hit some huge numbers.

He said minutes of people’s times are the currency, and games are consuming more of it than ever. That’s especially true during the pandemic.

“If you have a big [intellectual property] IP, like Harry Potter, players spend months with every single character, rather than just hours with a book or a film,” Yguado said. “It would be such a huge missed opportunity if you didn’t consider mobile games as one of the best ways to interact with your core fans.”

Angry Birds, Pokémon, and other gaming brands have broken through to surpass franchises that are much older, and they’ve migrated to other types of media. Over time, Yguado expects that to happen more as IPs introduced in gaming cross over to other forms of entertainment. It makes sense for Jam City to partner with Disney on games like Disney Frozen Adventures or Warner Bros. on Harry Potter.

The key, he said, is for entertainment companies to remember to treat games as an equal or even the biggest platform, in terms of the ability to engage the audience and generate the most money. If you think of games as an afterthought or subservient to movies, then it will limit what the game companies can do.

Jam City’s strategy is to be the key partner that will work on a mobile game for years to make it just right and position the IP to grow a lot more in mobile gaming, Yguado said.